In response to a reporter's question, the president spills the beans on North Korean dictator 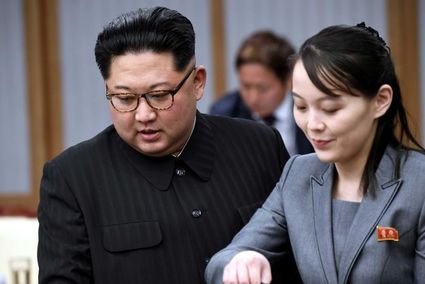 Kim Jong on and his sister, Kim yo Jong

In Monday’s Covid-19 press conference, a reporter asked President Donald Trump where Kim Jong Un was, and what the North Korean dictator‘s state of health might be.

The president was asked during a White House briefing whether he had any updates on Kim’s health, which has been the subject of rampant speculation in recent days.

“I can’t tell you, exactly — yes, I do have a very good idea, but I can’t talk about it now. I just wish him well,” Trump said.

“I hope he’s fine,” the president added. “I do know how he’s doing, relatively speaking. We will see. You will probably be hearing in the not-too-distant future.”

“I have a good idea where he is and how he's doing," replied president Trump." I can't tell you now but I can tell you that everyone will know soon enough and I wish him well I wish him the best."

President Trump on North Korean leader Kim Jong Un's health: "I do have a good idea but I can't talk about it now, I just wish him well...I hope he's fine, I do know how he's doing relatively speaking, we will see--you'll probably be hearing in the not too distant future"