On a beautiful spring day, people could see the empty Pier, look up the street to the closed Palisades Park, and ask why?

Protestors at the Santa Monica Pier, itself shutdown since March 15th, demanded that California reopen immediately. 5/9/20

5/9: As part of State-wide “Open California Now" demonstrations, about 80 protestors at the Santa Monica Pier demanded that California reopen immediately. Some wore masks and others did not, and they were tired of socially distancing.

One man who told me he was an independent contractor and an Uber driver, said that he had not worked for two months. "I'm tired of being at home and being broke," he said. He was not wearing a mask, but a protestor named Lori, herself suffering from an auto-immune disorder, said that the spread of coronavirus could be prevented by masks in combination with social distancing.

"You can go to grocery stores and select places and as long as you wash your hands and practice social distancing, you'll be safe," said Lori. "I have an auto immune disorder, and I do know that it will be effective for me if I wear a mask and I'm in public. But safer at home doesn't work for me, and it's a violation of our constitutional rights. Public officials (who are in favor of the lockdown), need to go back and refigure," she said.

The Santa Monica Pier itself shutdown on March 15, 2020. The 100 year old landmark is usually crowded with tourists year round. Protestors could see down the ramp to the empty pleasure pier, bathed in sunlight in 72 degree perfect So Cal weather. On a beautiful spring day, people could also gaze up Ocean Avenue to the barricaded Palisades Park, and ask why they were still being asked to socially distance. Almost 2 months after the California lockdown began, what exactly is it achieving, they asked.

The protests were part of "Open California" protests planned throughout America's biggest State. California government is politically dominated by progressive politicians, who see an indefinite lockdown as necessary and see business people who want to end it for economic reasons, as misguided and selfish.

The City of Santa Monica faces financial ruin, as the $800 a night hotel rooms are largely empty and the tourists are "Safer at Home."

The protestors say that there is no evidence of outdoor transmission. New York Gov. Andrew Cuomo, the poster child for the "Every Life is Priceless" perspective on Coronavirus and mitigating all risks down to zero, has himself recently admitted that Covid-19 appears to be transmitting among people who stay at home.

Authorities worldwide report over 4,000,000 cases of the novel coronavirus or "Wuhan Virus." 276,000 people have reportedly died. Protestors ranged from people with doubts over the accuracy of these statistics, to anti-vaxxers and people who allege a plot to vaccinate all of us so as to tag us with micro chips and track our movements.

Nationally, the politics of the lockdown consists of progressives who say science is on their side, while Conservatives allege that progressives are using the lockdown and coronavirus as an opportunity to re-order American life.

The debate has taken on an increasing Left vs. Right tone, with progressives saying vulnerable populations need to be protected by a vast continuing lockdown, while those on the right say the downturn in the economy threatens everyone more than the virus does. 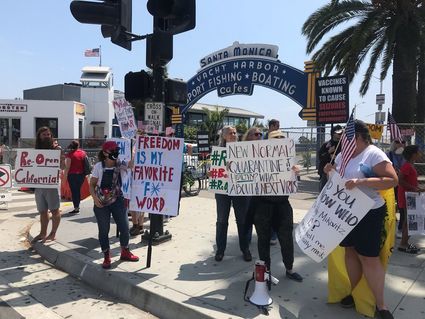 Protestors at the Santa Monica Pier, itself shutdown since March 15th, demanded that California reopen immediately. 5/9/20

Tesla Motors CEO Elon Musk said today that he might move his electric car manufacturing facility out of the State. "Covid-19 shutdowns are the last straw," he tweeted suggesting he was looking at relocating to Texas and Nevada. Tesla's Fremont assembly plant has been locked down for 7 weeks. Tesla's only other assembly plant worldwide is near Shanghai, and that facility also closed temporarily this week.