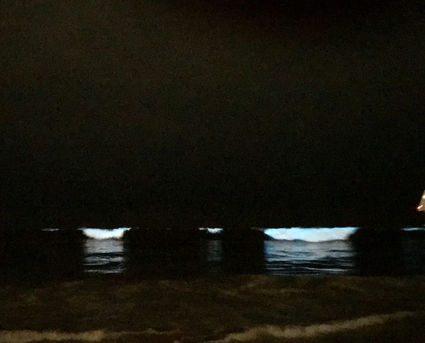 Lockdown? What Lockdown. Crowds of people watch the blue waves roll in.

The annual event was more visible this year, due to a major red tide that stretched from Baja California north all the way to Ventura County's Hollywood Beach.

The crowds we saw were polite, and delighted in the waves, reacting with oohs and aahs. And yes, they socially distanced on the shore.

The tiny creatures are said to have attributes of animals (they consume prey), but also of plants (they have chlorophyl and turn sunlight into fuel).

Their bioluminescence is generally believed to be intended to startle predators into not eating them. They flash when agitated, by waves or other stimuli.

UPI: May 13 (UPI) -- Some beaches in the Los Angeles area of Southern California will reopen Wednesday and certain business in other states will be allowed to resume, with restrictions.

In Los Angeles County, all beaches will reopen for ocean activities and exercise but with several restrictions. They include social distances of at least 6 feet and face coverings. Social gatherings, sitting and sunbathing will remain prohibited.

The beaches in Los Angeles County have been closed for two months.

Neighboring Ventura County is also allowing beaches along its southern coast to reopen Wednesday with similar restrictions. The city of Long Beach is considering a similar measure.

Ferrer told county commissioners Tuesday the order will "with all certainty" be extended through August unless there is a "dramatic change to the virus and tools at hand."

Madison County, Ill., said it plans to reopen Wednesday -- defying Gov. J.B. Pritzker's statewide plan. The county board of health voted overwhelmingly Tuesday to reopen, making Madison County one of the first areas in Illinois to defy the governor's plan. 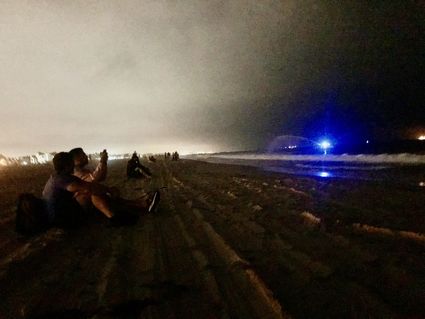 In Florida, beaches in the Gulf Coast city of Naples will reopen Wednesday following a two-day closure. The city council closed them Sunday due to overcrowding and users not following social distance guidelines. The Hollywood Beach Broadwalk in Broward County is also expected to open with limited hours.

In Arizona, gyms, pools and spas in the state can reopen Wednesday after being closed for two months due to the pandemic. Gov. Doug Ducey also announced major league sports can resume, without fans, starting Saturday when his statewide stay-home order expires.

In Kentucky, hospitals can resume non-emergency surgeries and procedures Wednesday at 50 percent of their pre-pandemic patient volume. Facilities will determine their own capacities starting May 27, as long as progress continues.