Church encourages others to give to the homeless on "Giving Tuesday," and at other times. 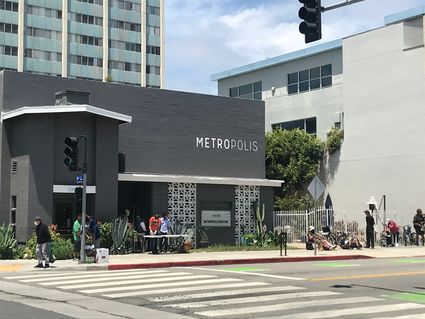 Homeless people line up for lunches at Metro Church in Santa Monica on Tuesday 5/17.

Metro Church at 6th Street and Arizona Avenue in downtown Santa Monica feed a number of homeless people and others in need on "Giving Tuesday," says the groups website.

"At Metropolis we have been given a unique opportunity to put love in action. We have served hundreds of bags of groceries and hot meals to-go for the most vulnerable in Santa Monica during this time. Our seniors and homeless neighbors need us right now. We need your partnership", says metropolischurchsm.com.

Homeless feedings have been somewhat controversial in Santa Monica. Some residents argue that they are a magnet for homeless people, 69,000 of whom live in Los Angeles County. Santa Monica has about 1% of the County's overall population, but about 3% of its homeless people are here at any given time.

The church also notes that A "Metro Relief Fund" was established at GoFundMe. "Metro is a family of disciples who carry on Jesus' mission of reaching our local community with God's love in partnership with other ministries in LA," says the groups Facebook page.