A Tribute to George Floyd, A Gentle Giant and a Man of Peace who loved God! 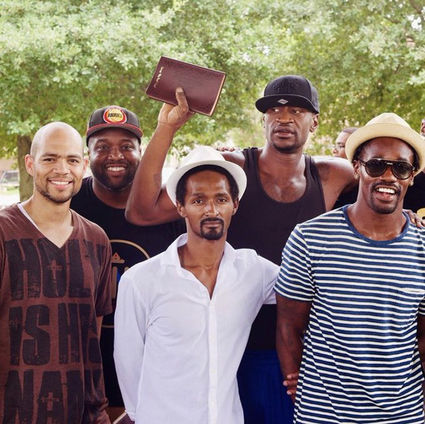 George Floyd holding a bible with his friend, Christopher Harris.

After speaking with several of George Floyd's family members and close friend Christopher Harris I cried. Tears rolled down my cheeks as I heard the countless stories of how everyone who was lucky enough to know George adored him for his kindness, unconditional love and generosity to all mankind.

Harris says Floyd wanted this world to be a melting pot of the light of G-ds goodwill for all people.

George Floyd, who was 6ft6 240 lbs., 46 years old, a former high school football and basketball star would continually coach children in his spare time. Many hip-hop artists who knew Floyd (Most of his friends liked to call him lovingly by his last name) shared stories on Instagram and Twitter about him being a "Man of Peace" and minister to the "boys in the hood" in the community outreach programs.

He often helped drag a pool to a basketball court in the projects so he could baptize the young boys in the hood, reading from the bible and singing in his soft soothing voice the words of god's blessings," Harris says.

"Many times he would carry snacks in his jacket to feed them afterwards. George was good to his family, children, mother, brothers, friends and co- workers. He gave support and a helping hand to anyone who asked," Harris said.

George Floyd moved to Minneapolis from Houston a few years ago for a "fresh start" upon the recommendation of Christopher Harris, Floyd's lifelong friend.

Floyd first worked as a security guard at the Salvation Army in downtown Minneapolis. Later he started working two jobs, one as a bouncer at Conga Latin Bistro, where he was known as "Big Floyd" and a second one driving trucks.

Jovanni Tunstrom, the bistro's owner, wistfully recounts how everyone loved "This Gentle Giant" in spite of his bumbling attempt at Latin dancing.

When the Covid-19 pandemic hit Minnesota and closed down all restaurants as part of the stay-at home order both Harris and Floyd were laid off.

When Christopher Harris met with George on Sunday evening, he seemed happy, and said he would do whatever it took to sustain himself even if it meant selling his watch , ring or CD player

None of George's friends or family think that he would every resort to forgery. No one is going to risk their life for $20.

A few years ago I bought an art print at an outdoor art fair in Beverly Hills and the vendor gave me a counterfeit $20. Unknowingly I stopped by a 7 Eleven that evening, and I gave it to the cashier, who informed me it was fake. No one called the police on me? Many people have innocently received or used a counterfeit bill, but nobody deserves to die for this.

My guess is that whomever George might have sold his watch, ring or CD player paid him with counterfeit money.

On Monday evening May 25, 2020 an employee of Cup Foods, a convenience store in South Minneapolis called the police after receiving a counterfeit $20.

The police pulled George out of his parked car, based on the suspect's description given by the Cups Foods cashier

George Floyd was handcuffed by the police who walked him over to the side of the building, George was not resisting arrest in anyway

Police officer Derek Chauvin violated the policies of the Minneapolis Police Department and pinned Floyd to the ground, keeping his knee on him (even for a full minute after paramedics arrived) for 8 minutes and 46 seconds, despite George Floyds crying plea that he could not breathe! On lookers called out for help. George Floyd lost consciousness and was not able to be resuscitated by the paramedics and died.

The other three police officers Thomas Lane, J Alexander Kueng and Tou Thao stood around and allowed this brutal murder of George Floyd

All 4 officers were fired , but so far the other 3 have not been charged , These "former police officers" were an accessory to this horrendous killing and I am certain that they will be tried as criminals.

Since the tragic death of George Floyd, it seems like the world has gone crazy. After a 3 month quarantine and stay at home order, nobody wants or needs any more curfews or restrictions!

I believe that peaceful demonstrations is everyone's constitutional right, however looting and destroying stores, buildings and properties is not!

Criminals and thieves don't care about George's death, It's only an opportunity to rip off the community. 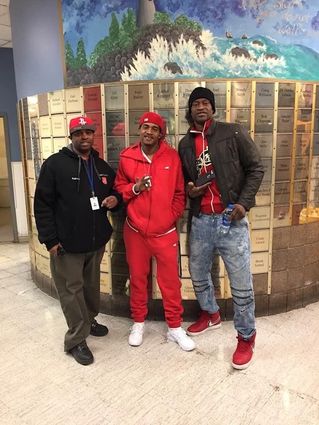 George Floyd with his friends, including Christopher Harris.

These volatile demonstrations that lead to the ruin of local businesses (often owned by minorities) are not honoring George Floyd, Gentile Giant and a Man of Peace who loved God!

#Black life matters! But looting does not venerate anyone!

I listened to one of George Floyds last video's where he is talking about "The lost young generation of men who carry guns an go out into the hood shooting and then they hide in bed at night with their legs shaking" Man you are going to go down or up with G-d. "

Let us pray that George Floyd's death was not in vain.

Let us change the legal system, let us end police brutality, let us make this world a better place for you, your children and grandchildren

Let us create a melting pot of the light of G-ds good will for all mankind , Black , White or Polka Dot!