District Attorney Jackie Lacey bragged that of all those arrested, she was able to figure out how to release most. 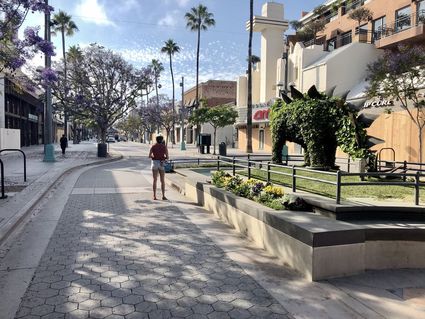 A woman looks down Santa Monica's Third Street Promenade, with boards on all the windows

On Sunday, a protest in Santa Monica regarding the death of George Floyd at the hands of Minneapolis police shifted toward violence and looting later in the afternoon and on into evening. Fires were set, windows were smashed, graffiti spray painted, and stores trashed and looted.

So far, the City of Santa Monica has received 350 damage reports with 150 retail businesses claiming significant damage. Widely publicized video from Sunday night shows scores of ecstatic individuals rushing from stores with their arms filled with booty. Though the city claims there were no serious injuries, some in the community disagree, citing store owners who needed to be hospitalized after they were beaten by rioters.

438 arrests were made Sunday and another 41 were made the following day in continued unrest.

However, only 61 people in all of Los Angeles County have been charged with any crimes in the looting that was widespread from the Grove in mid-Wilshire, to downtown Los Angeles, Santa Monica, and Long Beach. Looting also occurred in Van Nuys, Norwalk, Torrance, and Compton.

17 people were charged at the Airport Branch Court, which covers western parts of LA County, including Santa Monica and Beverly Hills.

That's it. 17 people charged regarding the mayhem that swept through Santa Monica on Sunday.

Jackie Lacey, the County DA, had the gall to brag about this. I suspect she was actually bragging that, of all those arrested, she was able to figure out how to let off the lion's share of them. "I support the peaceful organized protests that already have brought needed attention to racial inequality throughout our society, including in the criminal justice system," she wrote. "I also have a constitutional and ethical duty to protect the public and prosecute people who loot and vandalize our community."

Lacey does not relish protecting the public. She does not feel passionate about restoring law and order to the county she is sworn to protect. She only has a "constitutional and ethical duty" to do so. Given her 'druthers, she'd rather not. So please don't protest her house the way you protested the LA mayor's. And, look, she's only charging 61 people with crimes - and many of those aren't even felonies!

Rioting, after all, is not, generally-speaking, a felony in California. It's a misdemeanor. And looting can also be a misdemeanor, especially if it's under $950 worth of merchandise. Worse than that, under COVID-19 emergency rules, defendants of misdemeanor charges are released without bail. Lacey admits that "some cases" fell under this category, and the defendants were released. They probably went on to loot Van Nuys the next night. If they ever show up for their court date, they face no more than a year in county jail and a maximum fine of $1,000.

However, if looting is committed during a burglary, it can rise to the level of a felony. Steven Katz, Head Deputy District Attorney at the Airport Branch Office, wrote us that, "In my experience, the vast majority of provable looting offenses are based on underlying burglary offenses rather than on theft offenses, as looting is generally committed during concurrently provable burglaries – i.e., against closed businesses in which the suspect's intent to commit a theft offense at the time of his or her entry into the business can be established."

Whether or not the prosecutor decides to go for a felony charge depends on whether or not they think they can prove the case, whether other offenses (such as vandalism) were committed during the looting offense, the nature and value of the goods taken, and the criminal history of the defendant.

Apparently, about 17 people fit that criteria - of the dozens, if not hundreds, ransacking the businesses throughout Santa Monica, cleaning out pharmacies, trashing the Vons on Lincoln, and destroying many of our valued and unique businesses.

Most of the people you saw gleefully running through broken glass with boxes of shoes- ? They will never see the inside of a jail. They will not have to pay remuneration. They just got to have a fun night out on the town in Santa Monica.

Although much can be said of the failure of local leaders to protect local businesses and residents, more significant are the extraordinarily soft crime laws in California. This is due in large part to voter-approved Proposition 47. This law, which reduced many felonies to misdemeanors, was approved by 58 percent of voters in California in 2014. In Los Angeles County, the measure was approved by 64.3 percent of voters. One presumes the measure won even more overwhelmingly in far-progressive Santa Monica.

Out of the goodness of our hearts (or the hearts of some of us), we approved a measure that enabled lawless miscreants to trash our community with impunity. The people of Santa Monica approve every "criminal justice reform" bill put before us. We approve measures to reduce criminal penalties, let offenders out of jail early, and reduce bail to zero. 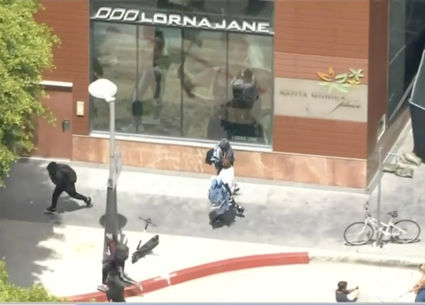 As repayment for our generosity, the beneficiaries of these reform measures used the pretext of racial outrage to destroy, burn, deface, steal, threaten, and beat us.

Today the city of Los Angeles announced they are going to reduce funding for the police department, one of the main demands of the "protesters." Los Angeles believes bending to the demands of angry, violent mobs will bring peace to their city. They are wrong. When decent, law-abiding citizens take on guilt for the actions of others, people who are neither decent nor law-abiding, it does not lead to the civic good. Only when people are held accountable for their own actions, hiding behind no extenuating circumstances and citing no historical grievances, can true justice be found.

While the inaction of the authorities to provide protection to the life and property of the citizens that abide by the laws and likely pay the bulk of the taxes necessary to ensure these same authorities live well is disappointing, it is not surprising. Voters continuously cast their votes for the feel good candidates that promise utopia but in reality delivery dystopia. These politicians always have an excuse and deflect when their policies fail and the voters buy their story. Election after election. It is sad. You get what you vote for. I voted with my feet and left the state. I could no longer justify the extraordinary high costs of living (real estate, taxation, utilities, etc.) in exchange for a lack of safety, standards, and enforcement of the law. Watching what has transpired over the past 90 days or so, voting with my feet was a good decision. You get what you vote for.