Bill of Rights holds good for everyone, regardless of viewpoint or 'anger' 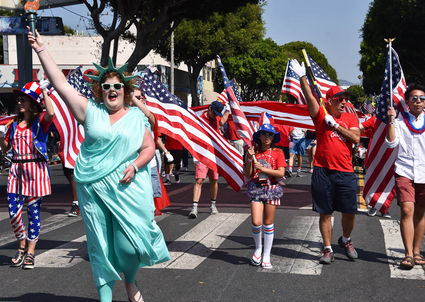 2019 Main Street Independence Day parade in Santa Monica. Why is it that you can protest, but not celebrate America?

The Ocean Park Association (OPA), which has run Santa Monica's Fourth of July parade for thirteen years, announced on Wednesday that they have cancelled this year's festivities. For over a decade, the parade has marched down Main Street, an amalgamation of home-made car floats, school marching bands, and other local groups. Spectators are residents of all ages who are willing to get up by 9:30 am, the parade's start time.

This year, however, organizers decided there were too many uncertainties, including providing health safety regarding COVID-19, funding cuts from the city, and the lack of ability to meet with all of the city departments necessary in order to fulfill conditions of the permit. In addition, Jeff Jarow, OPA parade organizer, said it would be difficult to obtain sponsorships from local businesses, who have little extra cash on hand after the three-month lockdown.

Independence Day parades have been held since at least 1785. Together with fireworks displays, they are used to celebrate community and pride in living in the freest country in earth's history, a country with legitimately adopted documents, the United States Constitution and its Bill of Rights. These foundational documents protect citizens from the inevitable encroachment of its own government. Parades exemplify two rights enshrined in the First Amendment of the Constitution, freedom of speech and the right of people to peaceably assemble.

The content of one's speech is not material to the protection of the First Amendment. It can be speech the government agrees with or disagrees with. It can even be speech that might be hateful to some, as when a group of neo-Nazis wanted to march through a largely Jewish suburb of Skokie, Illinois in 1978.

Since March 19 and the lockdown of the state of California (and most of the United States), many of our rights as U.S. citizens have been revoked, allegedly temporarily, in order to stem expected infections from the novel coronavirus. The right to peaceably assemble has been limited to 10 people, and then reduced to those who live in your household. Free exercise of religion has been completely abrogated with all places of worship forced to shutter completely. Even funerals have been either prohibited or limited to 10 people.

Both local and federal officials have been within their legal rights to limit our freedoms because of the health threat apparently posed by the SARS-CoV-2 virus.

What government officials do not have the right to do is selectively exempt some groups and not others from the restrictions that have been imposed to reduce COVID-19 infections.

Officials with the City of Santa Monica have told us that regarding Independence Day celebrations they are following the guidance of Los Angeles County and therefore "all gatherings with non-household members are currently not permitted, unless specified."

Yet on at least two recent occasions, May 28 and May 31, activists have gathered in Santa Monica to protest police brutality in general and specifically the death of George Floyd at the hand of a Minneapolis police officer. On June 10, there was an additional protest about the actions of the police during the May 31 protest. In all three of these events, hundreds gathered and, though some wore masks, there was little social distancing and quite a bit of shouting, a known risk factor. The protest was allowed by local officials and even enabled with police protection and air surveillance (precautions that did not prevent the May 31 march from transforming into a pitched street battle while rampant looting was able to occur mere blocks away).

Throughout the country, large protests, some including many thousands of activists, have crowded city streets. No officials anywhere have sought to shut these protests down over what would undoubtedly be valid concerns about the spread of COVID-19. Even though this fear of COVID-19's spread was used to abrogate the rights of citizens to peaceably assemble in their place of work or their place of worship, it was not used to abrogate the right of those protesting police brutality. 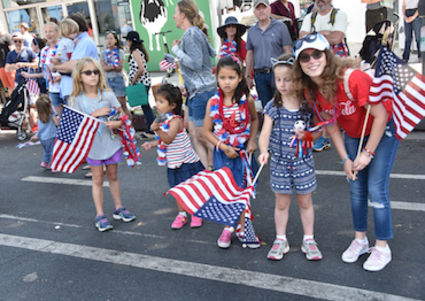 2019 Main Street Independence Day parade in Santa Monica. Does Covid19 really mean that you can protest, but not celebrate America?

The government, both local and national, needs to take a consistent stand regarding the health threat of COVID-19 and its impact on our constitutionally guaranteed rights. If activists against systemic racism can be allowed to exercise their First Amendment rights to free speech and peaceable assembly by gathering in enormous and dense groups, shouting and chanting - a situation that is undeniably conducive to infectious spread - then so should any other individual or group. Churches should be opened without restriction, lockdown protestors should be allowed to gather in front of the State Capitol, and mourners should be allowed to gather at funerals.

The content of the speech or religion is not and should not be relevant when granting or restricting First Amendment rights. People who hate America and concoct distorted fantasies about its supposedly corrupt foundation have as much right to free speech as people who love America and are eternally grateful for the wisdom of its foundational documents.

The extraordinary passion of a particular group for its ideology or its bullying behavior should not be a reason to selectively allow it to exercise free speech. This is not the equal application of law to which we are all entitled. This is not the leadership for which we elected our government officials.