Chanting "F**k the Police," a group of around twenty activists swung rope over the image of the bearded panhandler and pulled it off its base. 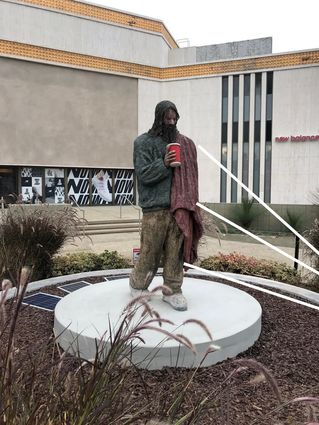 Over the weekend, protesters pulled down the much loved statue of the homeless meth addict outside the former bank building at 26th and Wilshire. Chanting "F**k the Police," a group of around twenty activists swung rope over the image of the bearded panhandler and pulled it off its base and onto the plaza that once housed the statue of a healthy family cavorting in a fountain.

The statue of the healthy family and the mural behind it of a beautiful California landscape were both lost to another city when local officials were distracted by the imperative of depriving minorities of voting rights. Some thought it fitting that a statue of a drug addict meth user should grace the once pleasant-appearing plaza in front of the building. Others thought the image was too common a sight in reality to make much sense as a work of art.

Protesters gathered about the statue on Saturday night, already stimulated to action by their march up Santa Monica Boulevard where raised fists, "BLM," and "No Justice No Peace" have been painted on the plywood boarding up looted windows as "healing gestures."

"This is white supremacy!" one of the activists was heard declaring, pointing at the statue, which depicts a bearded man with a dirty blanket thrown over his shoulders, holding a Dixie cup. The Dixie cup indicates his drug addiction as meth addicts suffer chronic thirst.

"It is?" another activist asked, clearly still a neophyte in the statue-destroying business.

"Of course it is," his neighbor argued. "Look at his skin color!"

"But he's a drug addict," the neophyte pointed out. "That doesn't seem so 'supreme.'"

His neighbor was disgusted. "It's white privilege to be able to get addicted to meth, don't you know?"

Around the neophyte, several more activists grumbled and shot him dirty looks.

"Only white people can drop out of school and legitimately have no opportunities in life," the first activist tried to explain, though he was clearly losing patience. "Only white people are unable to get into the college of their choice because of affirmative action. Only white people might miss the chance to receive a full scholarship. So you see, only white people have the excuse to be complete deadbeats." 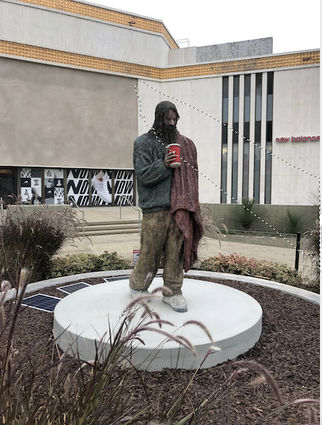 "Oh." The neophyte nodded his head, starting to get it. He was white himself, as were all of the others gathered around the statue. He knew very well how easy it had been to get rejected by the same Ivy League colleges who would have accepted him if he'd been a freshman with a different skin color. He knew how easy it had been to have every job application for a professorship in Sociology get rejected because of his skin color just this past year. It would be no problem at all for him to start a legitimate drug addiction.

"You're right!" He shouted. "This statue must come down."

It took twenty minutes for the protesters to find the right angle at which to affix the rope to topple the statue since they all had degrees in the humanities and none had a working knowledge of engineering.

They were unpleasantly surprised when they finally finished tearing down the statue to hear a round of applause from a group of onlookers who'd gathered around.

"Finally, something we can agree on!" a resident was heard saying.