Investigation believed to center on homeless community behind shopping center 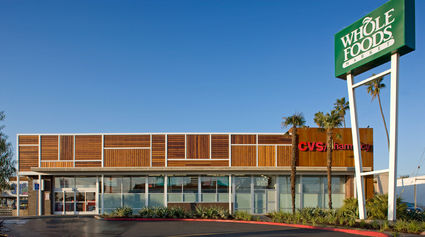 LAPD responding to a shooting INSIDE CVS located at 119 Lincoln Blvd. in Venice. Call came in at 9:13pm. 2 victims at this point, 1 conscious and breathing - the other not conscious, not breathing. Suspect described as a male black with a blue sweatshirt.

Two men were shot dead when a gunman opened fire in the parking lot next to Whole Foods Market in Venice Monday night at 9:20 pm.

The shooting occurred about 9:15 p.m. Monday in the parking lot at 119 Lincoln Boulevard and Rose Avenue.

"Victim one and victim two were standing in the parking lot when a suspect approached on foot striking both victims," Officer Jader Chaves of LAPD said.

A motive for the shooting was unknown, and the shooter was at large Wednesday.

About fifty homeless people are known to live just behind the Rose and Lincoln shopping center.

It's unknown if the shooting was gang-related or whether the victims were homeless, police said. They said that a detailed description of the shooter was not available, though there are believed to have been witnesses.

"We're trying to piece that together," LAPD Capt. Brian Morrison told NBC4. "We do understand that area businesses were open and we're seeking the public's help because we know there was a large crowd here."