Keren Levy, Payoneer COO, says the company is taking "urgent steps to resolve this situation. We know that many of you are hurting."

Update, 6/30/20: Tuesday morning, Payoneer sent the following email: ... "the FCA has completed its audit and lifted the freeze on your Payoneer Prepaid Mastercard® card. We know that this period has been difficult for you. We appreciate your patience and support while we worked to get the situation resolved swiftly."

Payoneer corporation has announced that its accounts which rely on Wirecard visa cards, are effectively frozen. The cards were frozen, says Payoneer, when the card provider, Wirecard, declared insolvency in UK court.

Keren Levy, Payoneer COO, says the company is taking "urgent steps to resolve this situation. We know that many of you are hurting." She notes that customers may still move funds from their Payoneer accounts into their retail bank accounts, as usual.

Major corporations such as MicroSoft's Medianet, and Google's Adsense, use the Payoneer system to distribute funds. It is the equivalent of PayPal in some parts of the world.

Several Payoneer customers have complained on Twitter that their funds are frozen missing. "I lost my family savings with #payoneer and #wirecard. Bloody hell!What's your responsibility for this @Payoneer?" posted Alex Samir.

One Greek Twitter user posted, "So there was a live stream with a higher level #Payoneer guy called Aaron Rossi. What he said:

1) The funds are secure and everything will be settled next week. 2) That they'll be replacing Wirecard with Citibank. After a while, both the video, and anything related disappeared."

"Due to the bankruptcy of the German company WiredCard, which owns the british branch that issues cards to #Payoneer, all accounts of users have been frozen and cannot be withdrawn. Payoneer's problem was caused by WireCard, which was convicted a week ago of falsifying reports." posted Amir Samir again on Twitter.

Wirecard AG is a German payment processor and financial services provider that is listed on the Frankfurt Stock Exchange as part of its DAX index, and headquartered in Aschheim, in the district of Munich. The company offers its customers electronic payment transaction services and risk management, as well as the issuing and processing of physical cards. In June 2020 Wirecard AG reported €1.9 billion in cash missing. A criminal investigation began on 22 June 2020 and its recently resigned CEO, Markus Braun, was arrested the same day.

On June 25, 2020, Wirecard filed for insolvency, but continues business operations. The Mastercard and Visa debit cards, however, appear to still be frozen.

On June 26th, Payoneer sent the following e mail to customers, denying that their funds were in fact frozen:

As you may have seen on the news, Wirecard AG filed for insolvency on Thursday. Your Payoneer Prepaid Mastercard® Card is issued by its subsidiary, Wirecard Card Solutions Limited (WCSL) in the UK. Today, the Financial Conduct Authority (FCA) which regulates WCSL, issued requirements on WCSL, freezing all prepaid card activity for the time being. We believe that cardholder funds are properly safeguarded and that the freeze will be temporary.

What does this mean? 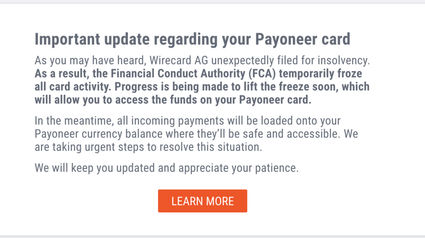 From the Payoneer website. Payoneer customers have seen their accounts effectively frozen, due to the sudden Wirecard AG bankruptcy.

The FCA has communicated that they have taken these measures with the primary objective of protecting the interests and money of Wirecard customers. Pending further actions from the FCA, you will temporarily be unable to withdraw the funds on your card, nor receive new payments onto your card.

Any funds that are in excess of the maximum balance of your card are held by Payoneer and are therefore not impacted by the FCA's temporary freeze.

How can I get paid during this time?

Any future payments that you receive from marketplaces, platforms and clients will not be affected by the freeze. You can sign in to view your funds, and you can now add your bank account for withdrawal of your future incoming payments.

We are actively working on offering additional options for you and your patience and understanding are highly appreciated. We apologize for any inconvenience this may cause and we'll update you with more information as soon as we have it.

Thank you, The Payoneer Team'