By Leonard Brophy
Special to the Observer

As The Plaza is Tabled and a Seat is Vacated, Santa Monica City Council Shakeup Continues

"Santa Monica Forward encourages the City Council to make an appointment to fill the seat and prioritize for consideration those with direct-lived experience as black Santa Monicans or people of color..." 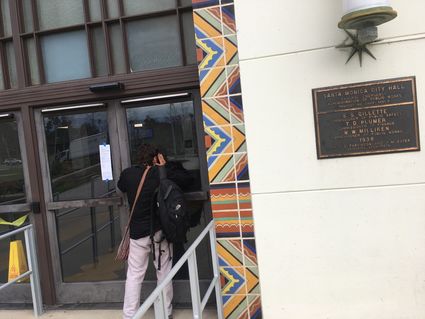 A resident peers into Santa Monica City Hall, wondering if it is even open.jpeg

Two months after Santa Monica City Manager Rick Cole called it quits in the wake of the City's serious financial problems coming to light, another local official has stepped down. City Councilman Greg Morena announced his resignation last week because remaining on the dais would make him unable to renegotiate the lease of his family restaurant on the Pier that has been closed since the beginning of the Covid-19 outbreak. Morena's final council meeting was Tuesday.

"Like so many independent businesses, I've struggled over the last few months to protect my family, my employees and their family," said Morena, who was elected to the council for his first term in 2018. "I've taken out loans and gone into the red to feed them, keep up their health insurance and to do everything possible to have jobs waiting for them when this crisis is over."

Morena added, "It's been an honor to serve the City, and even in the most difficult times, I've loved every minute of it. I love you all and I love the City."

Several council members praised Morena for his good sense of humor, positive attitude and business knowledge that he brings to the dais. They also said since he is just 42, he could return to the council at a later time.

The council is now accepting applications from people wanting to replace Morena. The replacement would serve through November and have to win an election that month to keep the seat. Applications appear on the City website, and the deadline to submit one is July 7. The council will vote on the appointment July 14. If it fails to make a decision, a special election will take place.

Carl Hansen, co-chair of the progressive group Santa Monica Forward, telephoned into the meeting to say he hopes the appointee will be a person of color because of current events and nationwide calls for cultural attitude shifts.

"Santa Monica Forward encourages the City Council to make an appointment to fill the seat and prioritize for consideration those with direct-lived experience as black Santa Monicans or people of color who can contribute immediately toward reimagining public safety and advancing a fully inclusive recovery," Hansen said. "Without an appointment, we will have an empty council seat for almost half a year at a time when the council will be making urgent and important decisions on critical issues. Now is the time for a full council."

A man who only identified himself as "Matt" told the council he didn't want an appointment, but instead the council should call a special election because the "council members are not transparent and accountable oftentimes to the voters." He also said he wants several current members of the council recalled. Councilwoman Sue Himmelrich took it a step further and wanted Morena's seat not to be filled at all in the near future and having the replacement placed on the general election ballot in November "to respect the democratic process and the will of the voter." She received no support from her colleagues after making a motion for this.

Postponed Decision on The Plaza

A major item the council was supposed to discuss Tuesday was whether City staff should restart negotiations with a developer on the proposed Plaza at Santa Monica, a mixed-use development planned for City-owned property at the corner of Arizona Avenue and Fourth Street. But the item was pulled at the last moment following legal threats from the zero-growth group Santa Monica Coalition for a Livable City.

The day before the meeting, SMCLC issued a statement that it had hired the "prominent" law firm Strumwasser and Woocher "to compel the City to comply with a state law known as the Surplus Land Act." SMCLC had claimed earlier in the year that project negotiations violated this obscure law, and the City halted talks while it looked into the matter. Interim City Manager Lane Dilg, who until recently worked as the City Attorney, determined in March that all was kosher.

Also included in the package are more than 48 units of affordable housing that could be placed at the site or located elsewhere. If they are elsewhere, it could mean more affordable units.

The zero-growth crowd is demanding a park at the spot, an unrealistic idea backed by no expert in the field. SMCLC reiterated this in its statement, saying the public (a vague term that could mean almost anything) has been asking for a park there.

"The law that's being skirted here provides a real opportunity to redirect the City's focus to public recreational use," the statement says. "Public land should have a public use that the public wants." 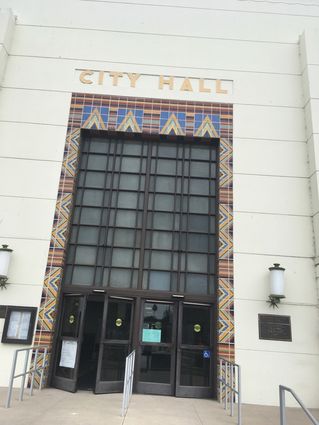 Also at the meeting, the council unanimously approved a $613.6 million budget for the next fiscal year, which begins July 1. This is a 25 percent reduction from last year for a City hit hard financially by Covid-19 because of business closures and tourism dollars being almost non-existent. The police department budget was cut by 3.3 percent, and the council allocated $225,000 to fund the Black Agenda, which a City press release said was "spearheaded by members of Santa Monica's black community."

"City budgets express community values, prioritized in a complex process involving patience and compromise - more so this time than in previous years and circumstances," said Mayor Kevin McKeown in the press release. "Pandemic-triggered revenue shortfalls forced tough decisions that impact service levels to our residents and the livelihood of our dedicated City staff.  Despite that, our City Council unanimously adopted a balanced budget aimed at Santa Monica's long-term vitality, focused on recovery and reform."