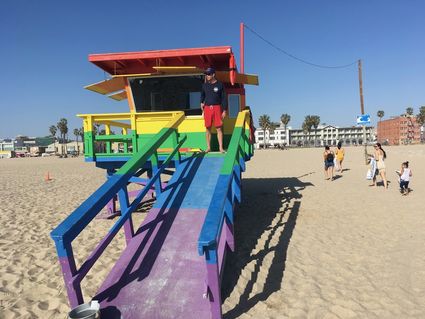 Even LA County lifeguards will be closed on Independence Day, 2020

LA County's ten million residents can look forward to a 4th of July with no fireworks, no bars, no public gatherings. But the marijuana dispensaries will be open, because after all that is an essential business.

"It feels like the disintegration of the country is exacerbating and accelerating," says political commentator Ben Shapiro

"LA County beaches are closed from July 3 through July 6 at 5:00 a.m. to prevent crowded situations that could result in more spread of COVID-19. All public beaches, piers, public beach parking lots, beach bike paths that traverse that sanded portion of the beach, and beach access points will be temporarily closed to the public. Fireworks displays are also prohibited," says the County in a press release.

"To date, Public Health has identified 107,667 positive cases of COVID-19 across all areas of LA County, and a total of 3,454 deaths. Ninety-three percent of people who died had underlying health conditions and 7% did not. Of those who died, information about race and ethnicity is available for 3,209 people (99 percent of the cases reported by Public Health); 43% of deaths occurred among Latino/Latinx residents, 27% among White residents, 16% among Asian residents, 11% among African American/Black residents, less than 1% among Native Hawaiian/Pacific Islander residents and 1% among residents identifying with other races. Upon further investigation, 44 cases and three deaths reported earlier were not LA County residents. Testing results are available for over 1,133,000 individuals, with 9% of people testing positive."