Dawit Kelete, 27, Arrested For Death of Transgender Woman on I-5 Freeway in Seattle

Mainstream Media Narrative flips, as a Somali immigrant turns out to be the man who ran down attendees at a Black Lives Matter protest on I-5. 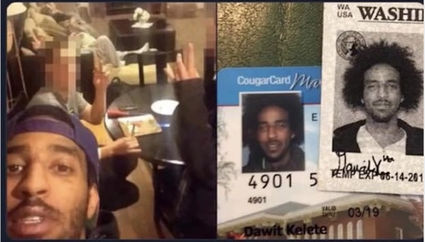 For the 19th straight night in a row, protestors had blocked the Interstate 5 freeway that runs through Seattle, in order to conduct their protest.

A white Jaguar evaded several police vehicles serving to block the highway for the protestors, hitting two transgender women who were attending a Black Lives Matter rally. All the major news networks replayed the video footage on TV.

summer Taylor, 24 of Seattle was killed Saturday night, when the white Jaguar driven by Kelete veered around several cars blocking the highway, sending the two women flying. Diaz Love, 32, of Bellingham is reportedly in critical condition after the accident on Interstate Five in downtown Seattle Saturday night.

The Washington State Patrol is holding Kelete on possible terrorism or manslaughter charges. His bail has not been set, and charges have not yet been filed. His arraignment is set for tomorrow afternoon.

By some accounts on social media, Kelete is himself a Somali immigrant. Others describe him as African American. One thing is for sure: This does not fit the mainstream media narrative. 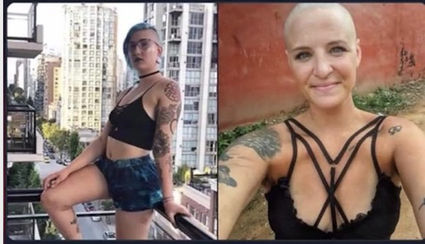 Summer Taylor, left, 24 of Seattle is dead. Diaz Love, 32, right of Bellingham is reportedly in critical condition after accident on I-5

"Jaguar that drove into Seattle protest is registered to Dawit Kelete, Plate No BPA6961. On 4/4/2020 homeboy blew red light & has at least 8 parking tickets all from 2020. From the photos he's NOT your average right-wing extremist. Rolling on the floor laughing. DONT WALK ON HIGHWAYS you Marxist BLM Terrorists," tweeted Michael Vilchey.

Witness accounts do differ. Some say Kelete was trying to avoid the protestors. ""Deliberately targeted." Excuse me? It was a black man that hit her, and as far as I can tell he swerved to try and avoid people on a freeway, in the middle of the night. Our politicians are shameless."

Correction, 7/6/20: Several readers have pointed out to me that the 2 victims described in this story were/are non-binary, rather than transgender. I'm not sure how that affects this story, but if you would like to know more about the distinction between non-binary and transgender, please see: https://en.wikipedia.org/wiki/Non-binary_gender

Also, by some accounts Kelete is Eritrean or Sudanese, rather than Somali.

He is from Eritrea not Somalia. Born 27/12/1992 and a US Citizen, so parents must have come on lottery visas or some such thing

Big Surprise here, Another 1 of Ilhan Omars Law Abiding Somali Immigrant citizensexplosion. Not All BLM.. Not this @$$hole.

More important than how someone identifies is the fact that these were 2 HUMAN BEINGS. Two human beings trying to navigate this world like the rest of us. Whether you agree with anything they did or not they did NOT deserve to severely injured or murdered. Show some darn humanity.

so did they have dicks or pussies?

Idiots having a dance on a freeway, 19 nights in a row really deserve to get run own... JUSTICE AT LAST !

STOP CALLING THEM TRANS AND WOMEN. THEY ARE NON-BINARY. This is blatantly disrespectful to the victims and is incredibly ignorant.

Backing up the last comment. Neither victim was transgender and the driver of the car is not Somali. One victim is still alive, unlike what the headline suggests. It seems like the writer of this article has their own biases as displayed through clear lack of journalistic integrity.

The driver did NOT go around police cars. It was the protesters cars.

NON-JOURNALISM ALERT! First clue: “straight nights in a row.” Uh, that’s redundant drivel bordering on doggerel. Also, they were both born female and opt for non-binary identification (using pronouns “they” and “them” instead of, for example, “she” and “her”), so they are NOT transgender. Also, Diaz Love is alive, Summer Taylor, who you disrespect with every line of your hackalism, has passed. Last, the section of I-5 where the murder occurred was closed to traffic by police. Quit your job, you dishonor then English language let alone journalism.

Wow! Clearly not much research was done for this article. You bungled all the facts. First the driver was not Somali, and the victims weren’t transgender women. Transgender woman means the person is assigned male at birth. That is incorrect. As poster above mentions, these folks were non-binary. I guess facts don’t matter anymore in journalism. Show a little respect for those that have passed please.

Transgender? There is absolutely no evidence for this description. Even if there was, how does that description describe the event? Why not mention if they are right or left handed? Garbage. This piece is garbage. Seattle resident

wtf? they weren't trans, they were non-binary