By Melanie Shaevel
his Grandaughter

The Legacy of the Deli King, as written by his Grandaughter 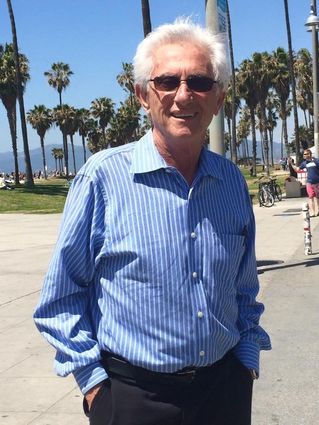 Maurice Solomon, former owner of Marjan's Deli and Fromin's Deli, passed away at 81.

I'm broken-hearted to write that my grandfather passed away on Tuesday after battling lung cancer, Parkinson's, and years of body pain. He is known all around Santa Monica and Brentwood as The Deli King, loved by so many.

He could always be found behind the deli counter almost everyday of his life before retiring at age 79. But his license plate continued to read “The Deli King.”

My grandpa's life, apart from his kids and grandkids (and great grandchild,) was the deli. Even after he retired, he often dreamed he was behind the meat slicer. We know this because he was quite the talker in his sleep. He lived and breathed the deli business.

Born in Brussels, Belgium, he spent two years as a "hidden child", evading Nazi capture by moving from town to town with his parents. At age 10, he and his family moved to Cleveland, Ohio, where he began his lifelong career working at Solomon's Deli and Lefton's.

In 1975, the Holocaust survivor and Deli Man arrived in Santa Monica where he proudly owned Marjan's Deli in The Brentwood Countrymart and Fromin's for over 25 years, serving equal amounts of corned beef, love, and laughs every day.

Maurice will be deeply missed by his family, friends and beloved customers. A public memorial will be held post quarantine to celebrate the legacy of this great man.

As a family, we would come in every Sunday for brunch to see my grandpa. He was so dedicated to his customers, we had to BEG him to come sit with us even for five minutes. He couldn't stand to see even one deli customer waiting to be helped. 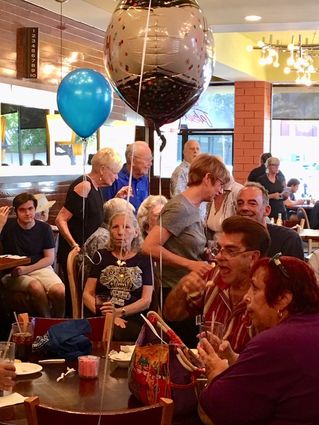 A birthday party at Fromins

I always looked up to my grandpa, and when us grandchildren were kids and would sleep at his house on the weekends, I'd wake up at 6:30am and open the deli with him for the early customers. He was well into his late 60s/early 70s, but never missed the chance to be the first to open the doors.

Another act that showed his true kindness -when the homeless came in asking for donations, my grandpa often sent them out with a cup of coffee :)

On July 7, 2020, Maurice Solomon, the former owner of Fromin's Deli of Santa Monica, passed away at age 81 after battling cancer for over a year.

If you have any stories or memories you'd like to share, please reach out to Maurice's granddaughter, [email protected]