Headlights of cars leaving Homer Alaska, as tsunami warning in effect for the Alaskan peninsula and south Alaska. 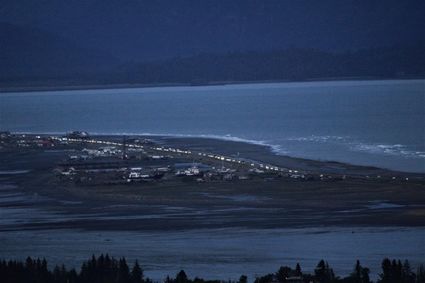 A beach in Homer Alaska seemed quiet at low tide late Tuesday night, as people left town their headlights could be seen in the midnight twilight.

A 7.8 earthquake struck the coast south of the Aleutian islands at 12:12 am PST, 11:12 pm Tuesday evening local time. It caused the US Geological Service to issue a Tsunami warning for the Alaska coast. The warning was cancelled at 1:26 pm PST.

Kodiak island in particular, and other coastal areas were warned. A tsunami warning was in effect for the Alaskan peninsula and south Alaska.Homer was evacuated.

Hawaii was outside the warning zone. So were California, Oregon and Washington.

The shallow quake struck at 12:12 am PST Wednesday about 500 miles southwest of Anchorage, and around 60 miles south-southeast of the remote settlement of Perryville, the US Geological Survey said. 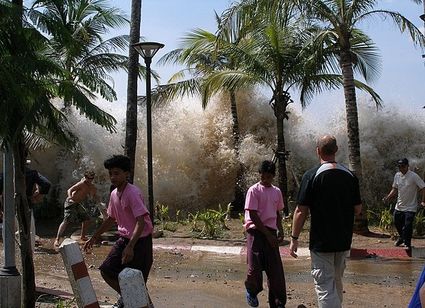 "For other US and Canadian Pacific coasts in North America, the level of tsunami danger is being evaluated."

"Based on the preliminary earthquake parameters ... hazardous tsunami waves are possible for coasts located within 300 km of the earthquake epicenter," the Pacific Tsunami Warning Center said. The quake was felt hundreds of miles away, for example in Anchorage and Homer Alaska.

"Magnitude for the #Alaska #earthquake has been upgraded to 7.8, and the alert area now includes #tsunami advisories for southern Alaska and the Aleutian Is. in addition to the original warning area. See the map at tsunami.gov

A tsunami is a series of waves in a water body caused by the displacement of a large volume of water, generally in an ocean or a large lake. Earthquakes, volcanic eruptions and other underwater explosions above or below water all have the potential to generate a tsunami