Why California's No Cash Bail Covid-19 Experiment, Is a Complete Failure and a Woke Joke

Result of No-Cash Bail: Man Stole Over a Dozen Cars, Released Each Time on His Own Recognizance, Now Faces 17 Years 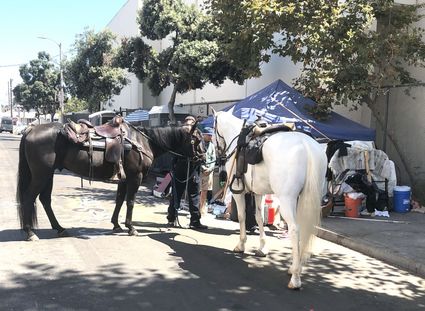 Mounted LAPD in Venice CA dismount to take a report of crime from homeless people at an encampment.

In a preview of good times to come should voters fail in November to revoke SB 10, California's No-Cash Bail law, a Huntington Park man stole over a dozen cars in twelve separate incidents - after being released from jail on his own recognizance each time.

Emergency orders reducing bail to zero were instituted in Los Angeles County during the last week of March, while all non-essential businesses were ordered closed. A week later, the entire state followed suit. Concern was expressed about the likelihood of Covid-19 spreading through the jail populations.

Jose Enrique Esquivel, 25, took immediate advantage of the situation, allegedly stealing a truck on March 30. Thanks to the concern over the health of criminal defendants, he was immediately released.

Esquivel, who is also known as Jose Esquibel, went on to attempt to steal another truck on April 28. He was again released.

According to our authorities, bail relief was only supposed to apply to nonviolent misdemeanors. Perhaps Esquivel's first arrest came under this category. However, his subsequent arrests brought his crimes up to felony status since they were crimes committed while he was out on his own recognizance. In addition, he had previously been convicted of auto theft: twice in 2017 and once in 2018 and 2019.

The only reason Esquivel is in jail today is because the county's emergency bail relief ended prior to yet another arrest on June 23 for allegedly stealing yet another truck. Los Angeles Superior Court set his bail at $550,000. Deputy District Attorney Alexander Karkanen of the Task Force for Regional Auto Theft says Esquivel faces a possible maximum sentence of 17 years in state prison if convicted as charged.

One might almost accuse the state of complicity in Esquivel's crime spree. By releasing him after each of his alleged crimes, the judicial system gave Esquivel the message that his actions were not significant enough to merit any sort of consequence. Emboldened and enabled, he went on to steal more cars and trucks. And now, thanks to the misguided 'compassion' of the justice system, Esquivel may be facing serious time in prison.

Meanwhile, over a dozen people had their vehicles stolen. For all we know, a dozen more also had their cars stolen, but Esquivel was not caught or arrested for those crimes. 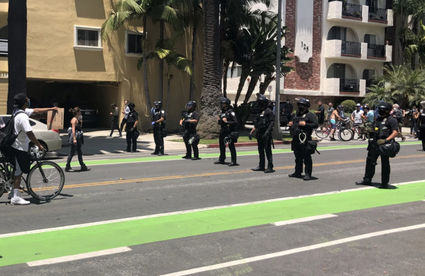 Prosecutors decry no-cash bail initiatives because they know the sort of characters they must face every day, people who, for various reasons, own no sense of morality, have no self-control, and inflict pain and loss on others without a drop of remorse. The only thing stopping these individuals from continuing to inflict pain and damage is removing them from society. This separation of criminal from decent citizen does not happen when criminals are released from jail and trusted to show up for their trial. Real criminals are not people you trust, and particularly one does not trust them to show up for a trial that may well end in a conviction and jail or prison time.

Remember Esquivel and people like him in November when there is an opportunity to keep cash bail. Remember that our government has already and repeatedly abrogated promises to release only nonviolent offenders and those who are convicted of misdemeanors. Remember that your property and your safety are only one woke judge's decision away.

Not only is the state complicit in the multiple crimes of the habitually criminal-minded by turning them back out on the street after each incident, but it also harms these people by the additional prison sentences that come along with each new offense. If the car thief mentioned above had been held in jail because he couldn't make bail, he'd probably be looking at eight yeas or less. Now, because of his repeated release and additional crimes, he's looking at a maximum of 17 years. And that's supposed to be compassionate and non-discriminatory? All public defenders and convicts' advocates should be vehemently opposed to no-bail ordinances. Truth is that no-bail schemes have only one goal, to increase crime as much as possible while police are hamstrung from doing their jobs via social justice nonsense. Amidst the chaos people will call for a solution which will be the federalization of all local police departments. It's coming in the near future.