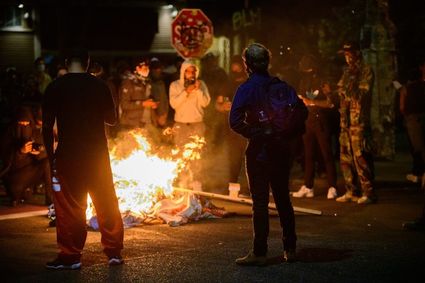 J Seattle who tweeted this photo, says it depicts a store burning after rioters set it on fire at 11th and Pine in the Capitol Hill neighborhood of Seattle

The Seattle Police Dept reports that it failed to take any action at all, when a group of 150 rioters attacked businesses in the 1400 block of Pine Avenue. For those not familiar with Seattle geography, this is near Cal Anderson Park.

This is what the Seattle PD has done everytime the rioters come to smash windows. Meanwhile, Mayor Durkan and the Democratic City Government in Seattle objects whenever the Federal government attempts to protect property in the North West.

We wonder just how long local property owners will allow this to continue, without demanding that their government intervene. Seattle PD's press release is below.

At about 9:00 p.m. a group of about 150 people gathered at Cal Anderson park. The group roamed about the Capital Hill neighborhood, doing massive amounts of property damage, looting, shooting fireworks, and committing arson.

Individuals from the group broke the windows of a business in the 1400 block of East Olive Way and then started a fire inside. Seattle Fire was called to extinguish the fire.

The group then went to the 1500 Block of 11 Avenue, breaking more businesses' windows along the way. Individuals then broke into a business, took merchandise, and put it in middle of the street where they lit it on fire.

The group went to Broadway and Madison, where individuals used baseball bats and pipes to break windows at a store. They threw fireworks into the store and then began looting.

The group headed to the area of Summit and Madison where they damaged property at two banks.

After leaving the banks, the group returned to Cal Anderson Park and then dispersed.

No arrests were made. No officers were injured.