The Illusion of a California Housing Crisis Versus the True Need for More Infrastructure, Including Water 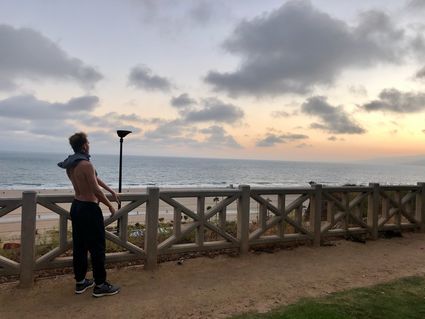 A young man watches clouds gather over the Pacific Ocean.

The State Legislature has been working hard to attempt to squeeze 1.8 million more units of housing into the state before 2029 by producing at least nine land-use proposals this year, each of which either enable, incentivize, or require cities to build more densely. Specifically, these bills end single-family-home neighborhoods. That is not an exaggeration. It is the stated goal of the proposed legislation.

State government should do nothing to supply housing. It isn't their job. Their job is to get out of the way of the free market, which will supply exactly the number of units needed in the most efficient way possible. It is the state government's job, however, to supply critical public infrastructure to make sure its citizens have access to such public utilities as roads, power, and water.

This is how the state legislature, in support of their zoning-control bills, decide there is a housing crisis in California. We do not dispute these facts. Housing prices are higher in California than in any other state besides Hawaii. People of moderate means need to spend more of their income on housing than do people in other places. We have a lot of homeless people on the street. And lastly, California's State Department of Housing and Community Development (HCD) decided the state needed to provide 1.8 million more units of housing before 2029.

Let's look at these facts and see if they actually add up to a housing crisis.

High housing prices reflect high demand. If the demand did not exist, the prices would not be high. Many, many people in the United States would prefer to live in California, where the weather is good, the beaches are beautiful, and rural recreational areas are within a few hours' drive of most urban locales. The fact only Hawaii has higher housing prices is kind of a hint as to why the prices are high in California. People want to live here. Prices are ALWAYS going to be higher here than they are in less desirable areas. People who want things that are in high demand need to be prepared to pay more for those things.

As for the homeless, very few of them would qualify for even the "very-low-income" brackets specified for affordable housing units. Most have substance abuse and mental health issues that do not allow them to hold jobs for even minimal wages, and therefore they have no ability to pay any sort of rent. New housing construction does not benefit the truly homeless. They need help of a drastically different sort.

Meanwhile, the HCD is an unelected bureaucratic agency, accountable to no one. Every so often they produce a Regional Housing Needs Allocation (RHNA). This is a magical number of what they believe, through their expert sorcery, to be the number of housing units needed for each region of the state. This number is not questioned by elected leaders, who have better things to do, like fundraise. There is absolutely no consequence to the individuals working at HCD if their number is wrong. No, not even if the number they spew out results in drastic economic, environmental, and physical damage.

What this deeper look at the facts reveals is that there is, in fact, no housing crisis in California. It's a made up problem that is being used as a lever to achieve goals very different from what is being argued.

All it takes is a cursory examination of the situation to understand that, in fact, the state faces a true crisis regarding its long neglected infrastructure. This, in fact, is a real responsibility of both local and state government. Existing roads are insufficient to transport the millions of residents already here. Before the pandemic and certainly after, the hours comprising rush hour have steadily and exponentially increased. People spend unacceptable percentages of the day sitting in traffic, time that could have been spend productively. This is called waste.

(And no, building more housing in "transit-rich" or "job-rich" areas does not solve that problem. You can't make people live near where they work, and most people change jobs every few years, so they will no longer be living near where they work in any case. And who wants to deal with the many low-lifes who hang out on public transportation? Or catch Covid-19 from them or the next disease down the line? So building more public transportation is not a healthy solution.)

The roads that do exist have been allowed to fall into embarrassing disrepair. Try driving the 405 Freeway toward the 14. It's like a roller coaster. The 101 Freeway has spots where the authorities have even had to install signs warning of a bumpy road. (They installed a sign rather than fixing the damn road!)

Should 1.8 million more residents come into California in the next nine years, we are going to need more fire and police stations - buildings. We will need more school buildings and campuses. We will need to upgrade and repair our fragile power grid. Are these public improvements being planned along with all of the upzoning our government wants to foist on us? 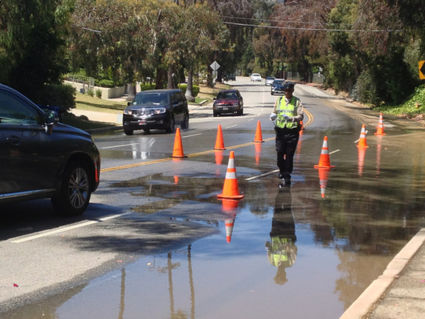 After a 100 year old water main broke on Sunset Blvd in 2014, UCLA was flooded. Nothing has been done to improve this infrastructure.

But the infrastructure issue of most critical concern is water supply. At this moment, we have 12.7 million residents in drought conditions, 34 percent of the state's population. And this isn't even a bad year. From December 2011 to March 2019, the state was in a sustained drought for 376 weeks. During 2014, the drought was severe enough to affect over half of the state's population. Despite a few recent "rainy" years, we have been warned that drought will become the norm in California. Legislation has been threatened that would ration water severely for all California households. And, in fact, during drought conditions, residents are warned to cut back sharply on water usage, even told to avoid flushing toilets or taking showers.

As matters stand now, no urban area of the state would exist without imported water. In large part this comes from Northern California and the Colorado River. Basically, the supply of water in this state is limited. There is only so much of it. And considering the real threat of the need to ration this essential commodity, how can our elected leaders, who are supposed to be looking out for the needs of their present-day constituents, honestly, sincerely, realistically, or morally suggest we add 1.8 million more thirsty mouths to the mix?

Of course they don't want to improve infrastructure while doubling the already massive population. It's the UN's Agenda 21 plan for the 21st century at work. They want to herd millions of people into already overcrowded cities to balloon them into mega cities with populations of 20-30 million people where they can all be easily surveilled under a pretended housing crisis. Rural folks will be told their presence in farmland creates too large a so-called carbon footprint and herded into the cities' new pack em and stack em apartment buildings. Meanwhile, the infrastructure not only doesn't get repaired, it collapses under the weight of the gross over-population. This is happening as we de-industrialize our nations in order to get to zero carbon emissions because of an equally fake climate crisis. The end result is a backward, easily controllable population concentrated in gigantic urban hellholes like Sao Paolo or Rio, Brazil with no technology or modern amenities available to them.