Protestors hope to shine a light on an underdiscussed topic 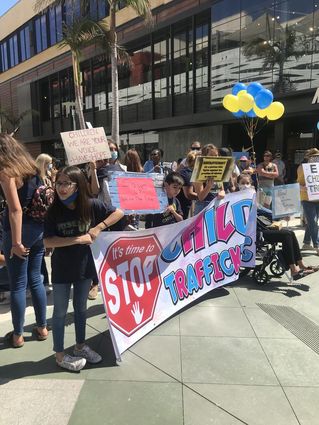 A protest held at Santa Monica Place shopping mall on Thursday, July 30th, was intended to shine a light on exploitation of children.

One local mom organized a protest Thursday afternoon at Santa Monica Place. About 250 protestors held up signs to protest the trade in children. 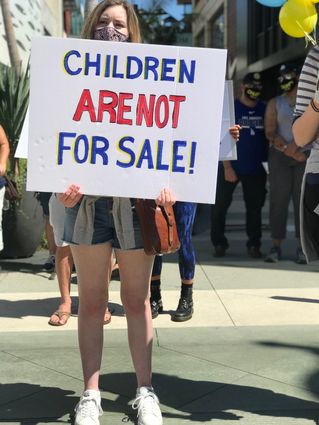 A protest held at Santa Monica Place shopping mall on Thursday, July 30th, was intended to shine a light on exploitation of children.

"We are out here to spread awareness because child trafficking has not been a mentioned in the main stream media that represents the true crisis and our local leaders have not made them a part of the conversation in these lockdowns," said Angelita Roman, organizer of a protest Thursday in front of Santa Monica Place.

"We want our local leaders to commit to seriously combating this issue and we want our local police officers to have the training and tools they need to fight this. Mobile crime lab, k-9, cyber training, etc."

Child Trafficking is defined by the United Nations as the "recruitment, transportation, transfer, harboring, and/or receipt" kidnapping of a child for the purpose of slavery, forced labor and exploitation.

Though statistics on child trafficking are difficult to obtain, the International Labour Organization estimates that 1.2 million children are trafficked each year.

Every year 300,000 children are taken from all around the world and sold by human traffickers as slaves. 17,000 of those children are brought to the United States, says the UN Office on Drugs and Crime.