Robert Trump maintained good relations with his older brother until the end. 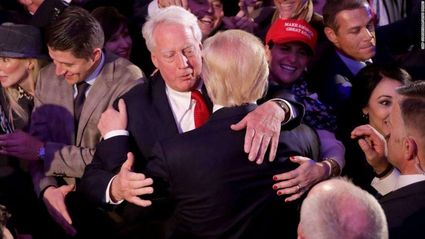 The president's younger brother Robert Trump has died at 71, after a fall and a cerebral hemorrhage. He also developed COVID-19 and complications of coronavirus while in the hospital.

Update: Robert was hospitalized at NewYork–Presbyterian Hospital in New York City on August 14, 2020. President Donald Trump visited him the same day, later stating that he was very ill and was having a hard time.

He died the next day, the cause was not disclosed. The New York Times reported about a family friend saying that Robert had recently started experiencing brain bleeding after a fall.

The Trump brothers saw each other Friday, when the president visited his younger brother in a New York area hospital. The two were close, though Robert did not live a public life.

“It is with heavy heart I share that my wonderful brother, Robert, peacefully passed away tonight. He was not just my brother, he was my best friend. He will be greatly missed, but we will meet again. His memory will live on in my heart forever. Robert, I love you. Rest in peace," the president said in a statement released by the White House late Saturday.

The president, more than two years older than Robert, admittedly bullied his brother in their younger years, even as he praised his loyalty and laid-back demeanor.

“I think it must be hard to have me for a brother but he’s never said anything about it and we’re very close,” Donald Trump wrote in his 1987 bestseller “The Art of the Deal.”

“Robert gets along with almost everyone,” he added, “which is great for me since I sometimes have to be the bad guy.”

Robert Trump was a business executive and real estate developer who managed the Trump Organization's real estate holdings outside Manhattan.

He was married to Blaine Trump until their divorce in 2007. He served on the board of directors for ZeniMax Media.

He was president of Trump Management, a company of which a trust fund benefiting Donald J. Trump owns 25% while the balance is owned by Trump family members. He was an investor in SHiRT LLC, one of two owners of Virginia-based CertiPath.