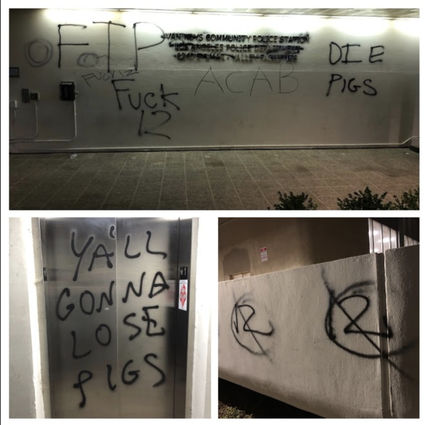 The LAPD says that lives of officers were threatened by a mom of BLM rioters on Friday night, August 28, 2020. The Black Lives Matter inspired rioters, spray painted the building with graffiti and allegedly threatened the lives of police personnel. The LAPD's statement is as follows:

Last night an unruly mob surrounded the Van Nuys Community Police Station, vandalizing the station and threatening the lives of police officers. Some of the damage can be viewed at this social media post or in the pictures below. Today, the Los Angeles Police Protective League issued this statement in response:

"Last night's defund the police riot at the Van Nuys police station is a pathetic reflection of those who continue to promote hate, violence and destruction to justify their dangerous anarchist agenda that calls for the abolishment of police officers in the city of Los Angeles. If Angelenos want to see more of this mayhem, more of our city overtaken by criminals hell-bent on destroying our city, then keep electing politicians like Councilmember Mike Bonin and his ilk who invite and celebrate this craven criminal behavior. For Angelenos who want to improve policing in Los Angeles and our "Formed in 1923, the Los Angeles Police Protective League (LAPPL) represents the more than 9,900 dedicated and professional sworn members of the Los Angeles Police Department. The LAPPL serves to advance the interests of LAPD officers through legislative and legal advocacy, political action and education. The LAPPL can be found on the Web at http://www.LAPD.com."