By Steve Morris
Author What Size Balls do I Need

Community Wins in Youth Sports when coaches focus on values, not winning. 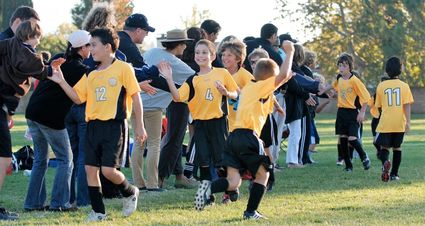 "What do you know about coaching?"

The question was valid; it was the sneer that got me. I turned into the narrow, skeptical eyes that pierced me from the passenger seat. "Huh? What do you know about coaching?"

He might have been only five, but my son Evan could take me out at the knees as wickedly as any seasoned defensive back in the NFL. I'd just told him that I was pulling him out of a soccer program run by a popular but capricious coach, and enrolling him in mine . . . which didn't exist yet.

Evan was right. The answer was "nothing." My last stint in organized sports dated back to high school, where my soccer coach was a repurposed chemistry teacher, whose go-to coaching tip was, "take a lap." I was familiar with the quote, mistakenly attributed to Vince Lombardi, "winning isn't everything; it's the only thing," but I didn't viscerally believe it, and on a practical level, it didn't come with an instruction manual. I wasn't yet conversant in John Wooden, and hell if I could figure out how to reconcile Phil Jackson's Eastern philosophy with his triangle offense, and then transpose it to five-year-old soccer.

It's humiliating when your kid is smarter than you are. Encouraging, too.

But Evan and the dozen pee wees I was able to corral for my first class wouldn't care either way. They just wanted to have fun. I fortified myself with a copy of every soccer book Barnes & Noble carried, draped a whistle around my neck, and purchased a dozen of the most brightly-colored soccer balls I could find. I prayed that if I could stay five minutes ahead of the kids, and keep them active and laughing, I'd be in business.

I survived that first class, exhausted, but smitten. Six months later, still in the infancy of my avocation, I stood peering down at the little four-foot beings that comprised my first AYSO U6 team, the White Tigers. I'd taken the basic coaching clinic, devoured what information I could find online, and avidly watched every game I could find on television, which was not yet the cornucopia of soccer it is today.

My grasp of the skills was still rudimentary – I couldn't tell the difference between a step-over and a scissors, and I certainly couldn't teach either to the kids – but what stilled my rapidly beating heart was the knowledge that I had a secret power waiting to be unleashed, one that I'd discovered back in my years at sleepaway camp, honed during my tenure in the film society at college, and called upon during my decade traveling the country producing television commercials.

Community. That was my secret power. A "fellowship with others," as defined by Merriam-Webster, who share "common attitudes, interests, and goals." Community was fundamental to the core of who I was. Who I still am. I've always felt that anything worth accomplishing alone was magnitudes more satisfying achieving with a group. Camaraderie and shared sacrifice in pursuit of a collective purpose, with fun as both the means and the end -- these were the themes that united the meaningful communities of my life.

Founded in 1964, AYSO (the American Youth Soccer Organization), the leading recreational, all-volunteer sports organization in the country, recommends a pre-season parent meeting, at which introductions are made, volunteer duties are cemented, and expectations for parental and coach behavior are laid out. It sets the tone for the months ahead, and lets everyone know that we're strapping in for this ride together. For those willing to take advantage, it lays the foundation for an experience that can be enjoyed by the entire family. It also provides the antidote to the anonymity felt on many teams, where the parents sit in the bleachers cheering for the only kid they know – their own.

As eager as I was green, I enthusiastically embraced the opportunity to build another community. I barraged the families with information, progress reports, emails day and night. Parents and siblings who came to practices were invited into the end-of-session scrimmages. And in what became a tradition, I produced a video, this one featuring my micro-warriors tripping over the ball and bouncing off the other team to the pulsing heroics of "Eye of the Tiger." (C'mon, we were the White Tigers). The kids loved it; any parents who may have been late to the party, finally raised a glass.

When Evan and his younger siblings, Dori and Griffie, graduated to the more competitive All-Star program, with the calendar stretching to six months, additional practices every week, and tournaments filling the weekends, the communal spirit flourished. Making everyone a stakeholder in the success of the team, and by redefining the dimensions of that success to include the values of camaraderie, generosity, and patience, fostered an environment within which the players could feel safe, supported and able to develop individually and as teammates. There was strength in numbers, and on each of these teams, my kids collected a new batch of best friends. As did my wife Marcy and I. Goooaaal!

Our teams were family, arguably closer and better behaved than those we said goodnight to. We pined for each other during the week and brightened considerably when we'd spot each other pulling into that weekend's parking lot. As long as we were together, it didn't matter where we played, who we played or when we played, though 8 a.m. games in the wet grass with the sun so low it would blind the goalkeepers, were favored by only a few.

What happened before, between and after the games was as important, and arguably more memorable, than what happened on the field. The car rides, the meals, the parties, the sleepovers, the rites of passage, and the collective vigilance. We'd look out for each other's kids as if they were our own. Often with more diligence than if they were our own. When Dori forgot her cleats for the same tournament in successive years, team moms saved the day by detouring to pick them up.

The happiest teams spring from a deep well of volunteerism. The greater the buy-in from the parents, in activities other than cheering and criticizing, the tighter the bond of the community. My kids' teams were blessed with a surfeit of support, from assistant coaches to field set-up crews to party planners. We were richest in referees, with Griffie's U10 squad sporting eighteen moms and dads, who donned the striped shirts and long socks in exchange for the best vantage point on the field, and an hour of exercise racing along with the action. Enlightened self-interest makes the world go round.

As the years passed, I managed to master the not-so-complicated step-overs and scissors, and a few more moves and tactics to boot. There were better teams out there, but few teams had a better time. All three of my AYSO All-Star communities thrive to this day, even if we're no longer convening in Lancaster, Camarillo or Encinitas. Get us together and the stories and characters will build to a crescendo of volume and vehemence, until soon the entire room is doubled over with laughter. The memories burn as brightly today as when they were formed.

Most of the players stayed with soccer or some other sport through high school, a few ultra-motivated souls going on to compete in college. But as their cleats gathered dust in the closet, and their medals drifted further back in their sock drawer, the larger lessons they learned – teamwork, sacrifice, pursuit of a common goal, generosity, loyalty, and the paramount value of friendship – continue to yield dividends in their daily lives as young adults.

Covid-19 silenced youth sports. Zoom and its teleconferencing cousins leaped in to maintain community and connection. While June saw an uptick in optimism as many programs resumed training, on weekends, for now, the fields are quiet. No finals, no games at all. The happy chatter of players and the barks and cheers of parents resound only in our memory, which tantalizes a difficult-to-discern tomorrow.

The games will return, and when they do, their success will herald – and follow – the revival of community. The dislocation we feel as individuals will dissolve when we can come back together. The power of everyone pulling together on behalf of our kids will be irresistible. And may just have the ability to catapult us into a new world that's better than the one we left.