State Assemblyman Richard Bloom said that he also deplored the ad, as did Santa Monican's Against Renters Rights 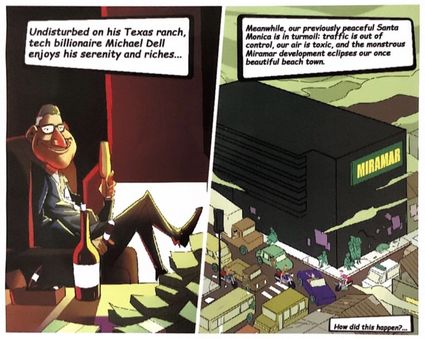 Former Santa Monica Mayor Denny Zane has sent an email deploring a "Racist and Anti-semitic" ad that was distributed with the Santa Monica Daily Press.

"Santa Monicans for Renters' Rights deplores the offensive advertisement opposing the proposed Miramar Hotel project circulated as an insert in the Santa Monica Daily Press. There is no place in our community's public dialogue for racism or anti-semitism in any form. We urge all of those participating in our community debate to refrain from such expressions,' Zane wrote.

"I don't see it," said when local Jewish woman. "Even if Dell is Jewish, it's about him, not about a group." 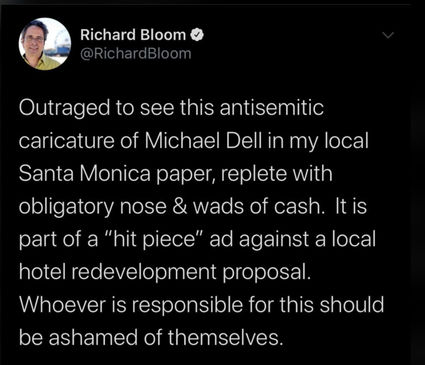 "Newsflash, the organized left in Santa Monica want this development. They call anyone they don't like racist," said another person.

The allegedly antisemitic flyer depicts Michael Dell with a hooked nose and a glass of wine. Dell is the main investor behind the Miramar expansion project, which would tear down 50 and 100 year old buildings and replace them with a tower. The project is located on prime, historic property at the NE Corner of Wilshire and Ocean Avenue. The property once belonged to US Sen. John Jones, the founder of Santa Monica.

The project is broadly opposed by Santa Monica residents. SMRR, the local party which has run Santa Monica for some 40 years, favors the project (and pretty much favors any proposed development. Only increased revenues might possibly pay the fat pensions promised to union members and former City employees.