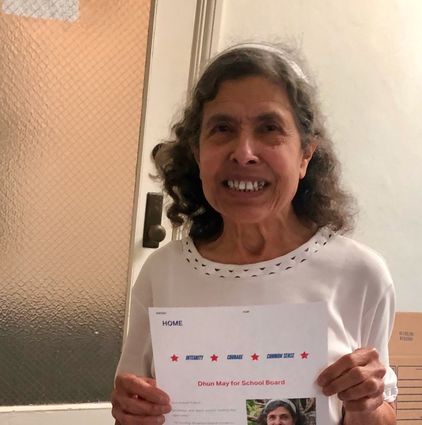 Dhun May immigrated to the US from India when she was nine years old. She is Zoroastrian, a minority religion in that country. She has an adult son who passed away named Daniel, and a daughter who is a veterinarian. The daughter, Armiati May, is an activist for veganism and opposes 5G. Dhun May has no grandchildren.

Why did you decide to run for SMMUSD?

"I have ideas no one else has," says May. "There are simple things that can be done to improve the health of children, such as providing more whole-food and plant-based options. This is actually healthier according to nutritionists. It makes children less susceptible to early-onset puberty, and it makes the classrooms calmer. Plant based-options, not forcing them to become completely vegan."

What qualifies you to sit on the school board?

"I have been in the business of substitute teaching for 40 years. March 13th was my last day with the Inglewood Unified School District." May taught one year at the SMMUSD 15 years ago.

May ran for school board 6 years ago. "I'm taking it seriously this time," she says. "At my age, I could be relaxing, but I want to have something purposeful to do."

May says she knows how to be diplomatic. She believes she can "make some inroads that will make a real difference."

What should schools do about Covid-19?

May is worried about the social justice issue caused by school closures. "People with money can afford home schooling more readily."

May thinks children "should be able to come to school and not be confined to some pod where they don't get any exercise. They shouldn't have to stay home."

What would you do if elected to the School Board?

"If elected to the board, there are a lot of financial issues we must deal with," says May. She is appalled by the physical state of the campuses. "There are bathrooms without soap, classroom windows that are stuck shut. There are rooms where children have done painting that have not been aired out. I've seen it with my own eyes."

May is very concerned about promoting good health in school children. Among her health concerns are vaccinations. She cites SB276, which she says forces children in all public and private schools "to be vaccinated with about 14 times as many doses as was generally required in the 1990s. This is a concern. Educators should at least be discussing it."

May believes there is a connection between all of these vaccinations and the rise she sees in the need for special education. "All kinds of behavioral and cognitive problems are correlated to vaccinations." She adds, "Also there is a correlation of autism and wireless radiation exposure. GMO foods are another problem- children are having more and more problems, and special education is becoming a really strong part of school." May says that "If these children had a plant-based diet, they would not have these problems."

May blames industry forces for selling "these products" to schools because they are profitable. But, "once you have children eating healthy in school, the benefits may last a lifetime."

What should be incorporated into the school curriculum?

"There should be character-building books in elementary school libraries," says May. "There are a lot of books that don't do much for the kids. If they could just put those things into their curriculum instead of all the propaganda and indoctrination."

May admits, "I kind of have old fashioned values; I believe in two genders. I don't want to tell anyone what to think." She is concerned about the subjects being brought up, starting in kindergarten. "Trying to tell kids to think things are okay that were thought of as wrong just a few years ago." She went on to discuss Social Justice standards. "Sounds great, right?" she asked. "One of them referenced something about two moms in a third grade class. If you want to talk about two moms, fine, but don't do it in school!" May would like to see some of these radical standards removed. However, she realizes that school board members have limited power.

For more information about Dhun May, visit http://www.dhunmay.com. For the statements of all candidates go to santamonicavote.org 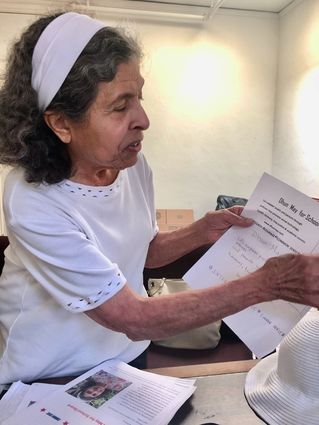 Note: upon reading the above text the candidate submitted the following correction: May indicated that there is a correlation between the increase in the number of doses of vaccinations being administered to children and the increase in special education

services and that there are many anecdotal accounts of health problems (including cognitive problems) that have resulted from vaccinations. She also indicated there was a

correlation between increased exposure to radiation from wireless devices and then increase in special education services as well as a correlation between the proliferation of GMO foods and an increase in special education services. She feels it is important that educators have meaningful discussions about vaccinations, RF radiation in classrooms and possible negative health impacts of food items containing genetically modified ingredients.