Infamous for Counterfeits and Flawed Products, Wish.com has Filed a Draft with SEC to go Public

Particularly alarming is Wish's handling of counterfeit and fraudulent product complaints, including dangerous items that expose consumers to injury or death 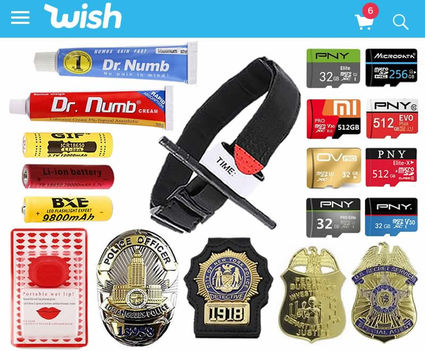 Examples of flawed and counterfeit products sold on Wish.com

October 13, 2020, Los Angeles, CA – Consumers looking to Wish.com may be attracted to its brand-name products offered by China sellers at a fraction of retail. Shipping may take weeks, or over a month for customers who prioritize savings over speed of delivery. However, many items are counterfeit, fake, or replica products, a common issue among major e-commerce sites including Amazon, eBay, and Walmart.

Wish announced it filed a confidential draft to go public with the SEC, a tactic that delays sharing its filings until 15 days before the IPO. Wish is losing about $190 million annually says Forbes, but Wish claims it could be profitable if it stopped spending so much on marketing. A more existential problem: "Lots of the stuff on Wish is trashy, shoddy, even fraudulent," adds Forbes. "There are hundreds of negative reviews for Wish on review sites like Trustpilot and HighYa. Customers are unhappy about unresponsive customer service, merchants who don't send their orders, and poor-quality goods."

San Francisco's Wish.com is now the third-biggest e-commerce marketplace in the U.S. by sales, claiming some 90 million people globally use it at least once a month. Wish reached 14% of mobile apps in Sept. 2019, according to Statista, compared to Amazon at 80%, Walmart 46%, and eBay 33%.

Particularly alarming is Wish's handling of counterfeit and fraudulent product complaints, including dangerous items that expose consumers to injury or death. One brand-owner wrote of grave concerns about counterfeit versions of their over-the-counter (OTC) anesthetic cream offered on Wish that was dangerous to pregnant women and potentially fatal if containing tetracaine, and not the lidocaine in the authentic product.

The Counterfeit Report, a global award-winning consumer advocate and counterfeit watchdog, investigated and easily found thousands of counterfeit, fraudulent, and replica items on Wish.com, and submitted hundreds of infringement complaints on behalf of, and authorized by, the brand-owners. Wish acknowledged the complaints and replied they "will be reviewed in due course," yet many items remained, some for weeks. While counterfeit sellers and scammers operate 24/7, The Wish Brand Protection Team hours are M-F, 9am-5pm.

Wish's Director of Brand Protection, Maral Behnam-Garcia, offered an ever-changing grab-bag of obstacles and conditions, including Wish's brand-protection application for right-owner's to act as data-entry clerks and fill online forms with their complaints. The Counterfeit Report found that Wish's system inadequacies did not allow registration, but an upgrade was planned "to launch early next year." Wish's counterfeit enforcement appears to be more obstruction than function, leaving consumers at risk.

Additionally, Wish claims, "Merchants are responsible for providing proof of authorization to sell their authentic, branded products before listing them on Wish," but Wish did not accommodate repeated requests to provide the documentation and counterfeit seller's identity included in each complaint. Some merchants have set up more than 1,000 accounts to evade policing, while others just relisted the same product after removal. It is challenging to assign credibility to Wish's claim when many counterfeit items researched did not even exist in the manufacturer's authentic product line.

Examples of unusual counterfeit and fraudulent items The Counterfeit Report found on Wish.com:

2. Fraudulent 18650 Lithium-ion ("Li-ion") batteries are a very real hazard -- a dangerous and deadly risk for consumers, airlines, and children. Thousands of reported fire and explosion incidents resulting in emergency-room visits in the U.S., including acute injuries that required hospitalization, and victims that suffered the loss of a body part. The FAA reported 262 air/airport incidents (fires and smoke) involving a lithium battery carried as cargo or baggage have been recorded, and three major aircraft accidents were reported where lithium battery cargo shipments were implicated. The battery case size limits legitimate 18650 batteries to capacities under 3800mAh (milliamp hours), yet Wish offers hundreds of fraudulent 18650 listings with wild capacity claims up to 79000mAh. The fraudulent items remain.

3. Composite Resources Combat Application Tourniquet® (C-A-T®) has been supplied to the U.S. Military, police, first responders, and the public worldwide for the past decade. The U.S. FDA approves the authentic life-saving device. Counterfeit and replica versions of the patented C-A-T tourniquet have catastrophically failed during actual life-saving applications, but are offered on Wish. The Counterfeit Report did not find a single authentic C-A-T® tourniquet listing after reviewing hundreds of listings offering replicas.

4. Tiny microSD® computer memory cards are used in cell phones, cameras, and laptops. The right-owner, SD-3C, LLC, licenses authentic, conforming products to use the microSD®, microSDHC®, and microSDXC® trademarks. Memory capacity and performance on counterfeit cards is usually not what is published on the card, and the fake items may fail or install malware on your device. When that happens, you are likely to lose your data, images, and damage your equipment. None of the Wish items shown are authentic, nor do they exist in any legitimate product line or the microSD standard. They are obvious fakes. Despite complaints, many infringing variations of the fake products remain listed.

5. U.S. based Fullips, LLC is a family-owned business producing very popular beauty and cosmetic products displaying registered Fullips® trademarks. Unscrupulous counterfeiters will produce anything to deceive consumers and make a fast dollar, including the counterfeit Fullips product shown. Almost visually indistinguishable from the authentic product, consumers are easily deceived into purchasing a poor quality counterfeit that may contain dangerous lead, carcinogens, and other suspect ingredients.

Websites like Wish, where anyone can sell directly to shoppers, are particularly vulnerable to fakes and fraud. Wish is one of 10 global platforms with the most counterfeits, said Joan Porta, of brand protection company Red Points. That places Wish alongside eBay, Amazon, Facebook, and Instagram. "We find hundreds to thousands of counterfeit listings every week."

A CBC News report found that more than half of dozens of well-known products they purchased from the online giants above were suspected or confirmed counterfeits. The popular products ranged from electronics to sportswear to cosmetics, and health and beauty products from multiple brands. Their purchases included MAC lipstick, Crest Whitestrips, Kylie Cosmetics lip kits, Urban Decay's "Naked" eyeshadow palettes, and Biotherm eye cream. The purchased items had substantial health risks in addition to the consumer financial hit for fake items.

A Chicago Tribune report identifies a Danish Consumer Council advisory warning consumers against purchasing cosmetics from Wish. Some items did not display an ingredients list as required by European Union regulations, and one face cream in the sample contained two prohibited preservatives. Consumers complained about rashes, pink eye, and other skin problems resulting from cosmetics purchased on Wish.

The Counterfeit Report® is the first and only website to promote counterfeit awareness and provide consumers a free and informative visual guide to detecting counterfeit products.

Counterfeit and fraudulent item sales are profitable and fund organized crime, terrorism, gangs, and exploit child labor. Interpol states on its website that there is a clear link between the illicit trade of fake or pirated goods and other crimes, including human trafficking, drug trafficking, and money laundering.

America's security, safety, and future are at risk. E-commerce marketplaces are destroying manufacturers, U.S. businesses, and endangering consumers. Adding another online counterfeit marketplace for public investment is not a prudent or safe plan.