In terror of being accused of election interference, Facebook interferes in the election 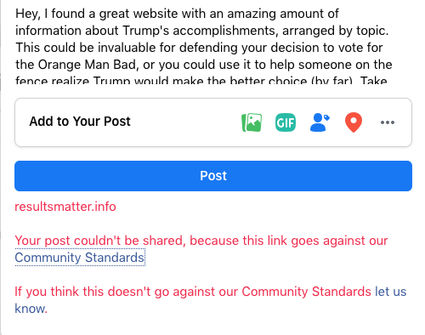 When Donald Trump was elected president in November of 2016, his opponents were dumbfounded. How could this television personality, a veritable buffoon, have defied conventional wisdom and every single poll that said he would lose by a landslide? How could the country possibly have chosen him?

The possibility that Trump and his message of "America first" might have actually appealed to Americans was discounted. Foul play must have been involved. Along with other conspiracy theories, later debunked, was the supposition that foreign trolls had invaded Facebook and swayed voters' opinions. Stern warnings were given social media sites that they must never let such interference happen again.

In response, Facebook, Twitter and, one assumes, other social media sites are going overboard in their endeavor to avoid being accused of allowing a bad, orange man to get elected. They are not allowing individuals to post links to websites that supply positive and factual information about President Trump.

A reader informed us that he was unable to post the following message in a Facebook group:

"Hey, I found a great website with an amazing amount of information about Trump's accomplishments, arranged by topic. This could be invaluable for defending your decision to vote for the Orange Man Bad, or you could use it to help someone on the fence realize Trump would make the better choice (by far). Take a look and share if you want:

Your post couldn't be shared, because this link goes against our Community Standards

If you think this doesn't go against our Community Standards let us know."

We took a look at the website, ResultsMatter.info. It was created by a lifelong Democrat who wanted to look objectively at the results achieved during the Trump administration. Arranged by topic, the site looks at the current administration's achievements in such areas as the economy, environment, education, health care, immigration, prison reform, war de-escalation, peace in the Middle East - and others. 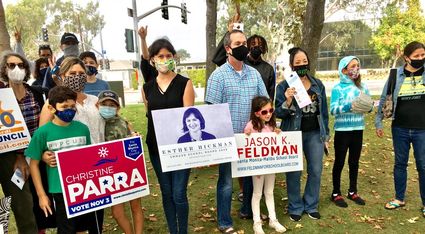 In what way could such a factual and informational website be viewed as a violation of community standards? There was no obscenity, violence, or harassment to be seen (legal reasons for social media censorship). The website must, then, have fallen under the "otherwise objectionable" criterion for censorship. Merely listing Trump's accomplishments is apparently an inherently objectionable undertaking.

This is censorship of an egregious level. And if that isn't election interference, we don't know what is.

Take a look at https://www.resultsmatter.info/ for yourself. Let us know if you can find a reason Facebook objects to the website - other than pure bias.

Some big name conservatives - actual conservatives who have been censored - need to band together and launch class actions against each one of these tech media giants. They are in violation of their own agreement to the government. They have agreed to act as platforms; but they act like publishers. With another constitutionalist about to join the supreme court, it's time to do the launch.