The leadership of the anti-American organizations wanted to keep a low profile until the election, but their adherents weren't having it. 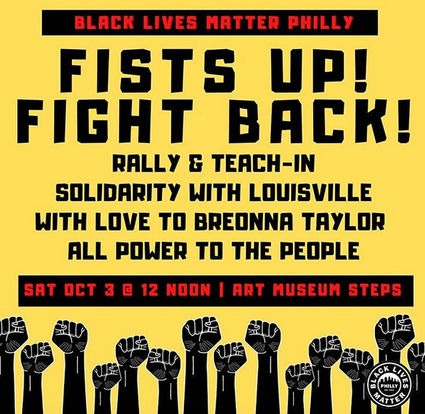 Fists up! Fight Back! urges a poster for BLM Philly

Protests sponsored by Black Lives Matter had wound down during October, prior to the national election on November 3. Even activity by Antifa had abated in Portland, where the group has besieged various public buildings since May 29. It had looked as though the two groups were working to help Joe Biden get elected. The violent chaos that had erupted in various cities around the country is not popular and was featured prominently at the Republican National Convention. Democrats have soft-pedaled the violent unrest as "most peaceful" or a legitimate expression of rage against an unfair system. By diminishing their presence in the news, BLMA and Antifa appeared to be trying to lessen themselves as a possible element against Biden in the election.

Then all hell broke loose in Philadelphia on Monday night. The pretext was the police shooting of Walter Wallace, Jr, a black man who is shown on video apparently charging police with a knife. Almost immediately, people went out into the streets, looting and rioting. The situation went completely out of control, with the Philadelphia police outmanned and unable to control the rampant looting and violence.

But the leadership of BLM in Philadelphia has nothing on their website about the purported civil rights protests. A large graphic claims "We keep us safe" and tells the viewer they are "Imagining community safety without policing." The News tab has no information about or calls to go out and protest Walter Wallace's tragic death.

It appears as though the people on the street creating mayhem, though calling themselves Black Lives Matter, do not necessarily have the sanction of BLM leadership for their imprudent behavior, mere days before the national election. Astonishingly, BLM does not have total - or even adequate - control over their adherents! Who would have guessed?? It turns out anyone who wants to call themselves "Black Lives Matter" can do so. Antifa has even less control over those deciding to dress in black, put on body armor, and go out and bash heads. 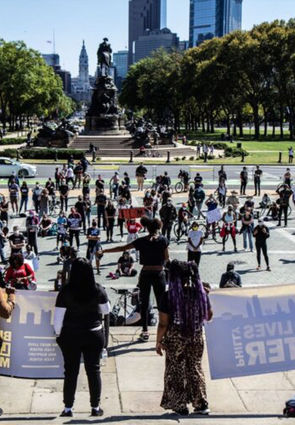 Those who have been cowed into donating money, in some cases astonishingly large sums of money, to BLM should take note of how little BLM really controls their message or their actions. If large, capitalist corporations think they can buy off the Marxist, neo-martial BLM, they are wrong. BLM does not control what people will do in their name.

Similarly, if elements in the Democrat party think they can use BLM or Antifa as levers to help them effect their progressive wish list, they are wrong. They cannot tell BLM or Antifa where to riot and where to back off any more than the leaders of those organizations can tell their minions when to stop the violence.

But try telling that to BLM.

They've opened the Pandora's Box but don't mind having done so.