As Downtown Businesses Board Up, SMPD Steps Up for Post Election Unrest

Some view the boarding up as a tacit admission that Trump is likely to win re-election. 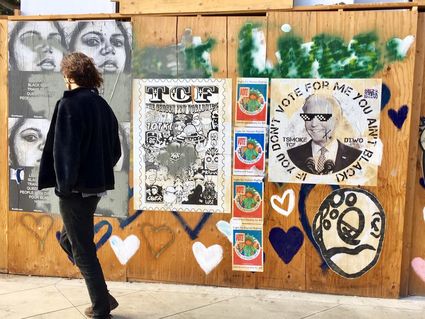 A Joe Biden poster on a boarded up store in downtown Santa Monica. Some see boarding up as a tacit admission by law enforcement that President Trump is likely to win re-election.

The Santa Monica PD issued a press release saying that "there may be concerns about the possibility of any kind of disruption during the week of our national elections.

"Currently, we have no intelligence to indicate Santa Monica will be a place of unrest. However, we also know that things can change rapidly and are actively monitoring the situation," says the press release, written by Lt. Joseph Cortez, SMPD PIO.

Some view the boarding up as a tacit admission that US President Donald J. Trump is likely to win re-election. After all, those on the right do not riot, and some progressives, such as Antifa and BLM, do riot.

The press release continues to say that the SMPD has beefed up staffing, worked with other partners. It notes that "there are very strict guidelines when in terms of police presence at polling locations. The Los Angeles Sheriff's Department will be working with the LA County Registrar's Office to handle security issues at ballot boxes and polling locations."

Beginning October 30, the community will see an elevated police presence throughout the city. Our visibility should not cause alarm and is dedicated to swiftly intercede with any type of criminal activity."

Unlike other cities, the SMPD declines to tell merchants whether or not to board up their stores. "However, we understand the need to feel secure and we respect your decisions on how to handle your day to day operations. If you choose to board up your business or want to have the materials ready to do so, we support you."

The press release closes with an appeal to follow the SMPD on social media, to keep aware of changing circumstances. Meanwhile Jacqueline Seabrooks was sworn in again as SMPD chief last week. Cynthia Renaud resigned amidst intensifying criticism that she had not handled the George Floyd riots well.

Meanwhile, the Beverly Hills Police Department said that it would be on "full alert" beginning on Halloween and continuing through next week due to possible social unrest, connected to the election.

Officers will have backup from other law enforcement personnel and private security teams. Meanwhile, the city plans to shut down one of the most iconic stores in its posh Rodeo Drive shopping district on Election Day. 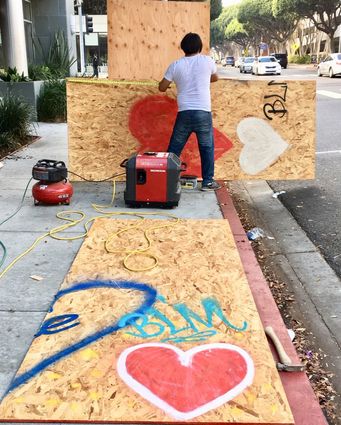 Stores are boarding up in downtown Santa Monica, a tacit admission by law enforcement that President Trump is likely to win re-election.

In a video posted on the city's social media platforms, Beverly Hills Police Chief Dominick Rivetti said luxury goods retailers "may choose to limit operations during this time." He indicated Rodeo Drive would be closed on November 3 and the following day from Santa Monica Boulevard to Wilshire Boulevard, a stretch worldly renowned for its elegant fashion boutiques.

According to the Los Angeles Times, "the move came as City Hall encouraged some businesses to board up their high-end stores." Looters and vandals targeted the vicinity in May when police used tear gas to disperse a crowd after declaring an unlawful assembly.

The problems stemmed from a series of demonstrations throughout L.A. County expressing outrage over the death of George Floyd, a 46-year-old Black man who had died while in the custody of Minneapolis cops.

"As election day approaches, and with the potential of increased demonstrations and protest activity across the region, the city is taking a proactive approach to ensure a safe community for residents, businesses, and visitors," Chief Rivetti said in the video.