If explosive report from Chanel Rion at One America News Network proves true, it means that DJT actually won the 2020 US Election 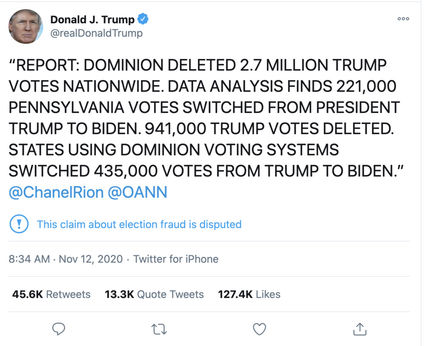 Trump Tweets, Twitter Blocks Post from OANN's Chanel Rion that a US ballot processing company deleted 2.7 million US Trump votes. If true Trump won not just the Electoral vote, but the popular vote in the November 2020 US election.

It's clear that Big Tech doesn't want Donald Trump sworn in as President on January 20th., 2021. It irks Twitter and the like that the US President is tweeting theories that he in fact won the popular vote, almost a week after the Media declared Biden the winner of the 2020 election.

The report from Chanel Rion was broadcast by OANN, One America News Network. Wikipedia says that OANN is a "far right," but apparently organic (meaning not a Russian front) US news network. "One America News Network, also known as One America News, is a far-right, pro-Donald Trump cable channel founded by Robert Herring Sr. and owned by Herring Networks, Inc., launched on July 4, 2013. The network is headquartered in San Diego, California, and operates news bureaus in Washington, D.C. and New York City." 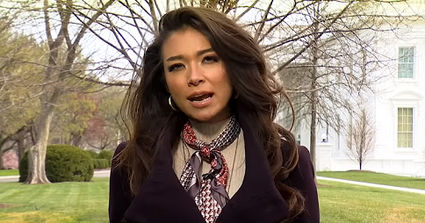 Chanel Rion on One America News Network. Her twitter handle is @chanelrion

The warning Twitter placed over the post clearly shows that Twitter does not want to be blamed for the results of the 2020 election. Twitter CEO Jack Dorsey has become the poster child for Silicon Valley's determination to see Joe Biden in the White House. About a week before the November 4th election, Senate Judiciary Committee hauled Dorsey in to testify (well, via Zoom) about Twitter's censorship of a New York Post story about Hunter Biden's receipt of influence funds from foreign sources.

The warning from Twitter says: "What you need to know

- Voter fraud of any type is incredibly rare in the US, according to The Associated Press and Reuters

- Experts say US elections are 'resilient'"

still waiting for hard proof of voter fraud. Election officials, democrats and republicans, in all 50 states say it didn't happen. No massive fraud conspiracy that could alter the election. Instead, they all say it was one of the safest elections in history. Voter fraud is a lie.

Chanel Rion. With ONE N! She is the news anchor on OANN. Not Russian news. Get your facts straight! Wow, so irresponsible of you!