Biden, who received 75,000,000 votes, said that he would focus on Coronavirus, the Economy, Systemic Racism and Climate Change 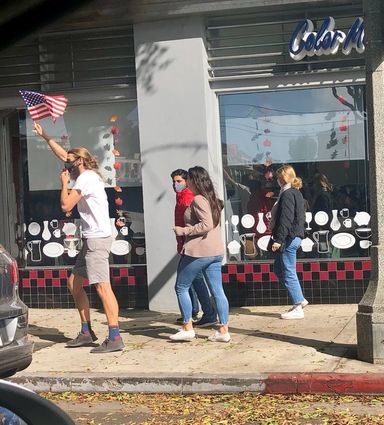 Main Street Celebrations in Santa Monica as Joe Biden is Declared Victor of 2020 Election. "We're celebrating America and democracy!" said the man with the flag.

Thousands took to the streets of major US cities to celebrate as Joe Biden seemed to have clinched the 2020 Presidential election.

"Joe Biden and I are ready to get to work on behalf of the American people," tweeted Vice President elect Kamala Harris.

President Elect Joe Biden said he was honored and humbled by his election, something he has sought for decades. He planned to address the nation at 5 pm PST.

US Senators Lindsey Graham and Senate Majority Leader Mitch McConnell said that they would work with their old colleagues Biden and Harris "on behalf of the American People." 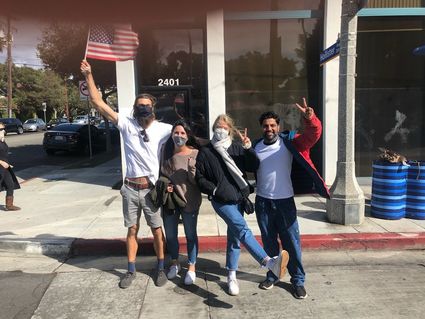 Main Street Celebrations in Santa Monica as Joe Biden is Declared Victor of 2020 Election. "We're celebrating America and democracy!" said the man with the flag.

Control of the US Senate would turn on two run off elections scheduled for Georgia for January 5, 2020. Most experts expected one or both seats to be awarded to the Republicans, assuring their continued control of the Senate.

In the house, Nancy Pelosi and the Democrats appear likely to continue leader ship with about 225 seats, down from 240.

Biden, who received 74,000,000 votes, said Friday that his administration would focus on Coronavirus, the Economy, Systemic Racism and Climate Change. As a candidate he had advocated a mask mandate and more aggressive, national lockdowns.

An even larger celebration took place in downtown Los Angeles. Some wore masks in response to the Covid-19 epidemic, which has killed 250,000 Americans and forced most of this years ballots to be cast by mail.

The celebrants were often seen dancing in front of boarded up stores. It is generally understood that the stores boarded up to avoid being looted by disappointed leftists. Trump supporters have not been seen looting anywhere in America.