Pacific Park remains closed, but the Pier itself is now open 24 hours. 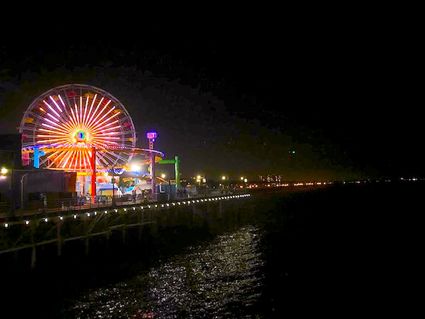 The Pier is open, Pacific Park is closed. And the Ferris wheel is displaying a turkey design for Thanksgiving.

"Pacific Park will be "Talkin' Turkey" on it 90-feet tall Ferris wheel while featuring Fall leaves, colors, patterns and transitions for the Thanksgiving Holiday Week," writes Pier communications manager Cameron Andrews in a press release. He noted that the Pier is now open 24 hours.

So while you cannot ride the ferris wheel, you certainly may want to look at it.

"Thanksgiving is an annual holiday celebrated on the 4th Thursday in November in the United States. This harvest festival is a time for people to give thanks for the bounty of the season. Thanksgiving is celebrated in several other New World countries including Canada and Brazil. In the U.S., Thanksgiving is traditionally celebrated with a large meal of turkey or ham and many seasonally harvested vegetables such as corn, yams, and cranberries."