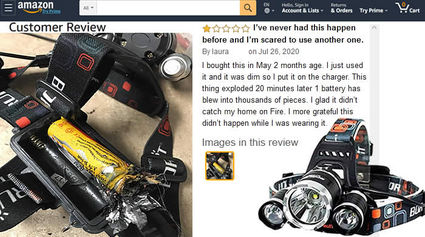 Amazon has tried to deny liability for products sold by third-party vendors on its website: that's over now

"This means the opinion will remain the only published appellate decision in the country holding Amazon strictly liable for a product sold on its marketplace," said attorney Jeremy Robinson, representing plaintiff Angela Bolger.

Bolger was using her laptop computer when a replacement Lithium-ion ("Li-ion") battery purchased on Amazon exploded. Bolger suffered severe third-degree burns to her arms, legs, and feet, and was hospitalized for two weeks.

Amazon, on a quest to be the sole source of all items for purchase, and pivotal in bringing products to the consumer, consistently disavows responsibility for defective products sold on its site by third-party marketplace vendors.

Operating under an umbrella of legal immunity, Amazon web platforms enable and facilitate the unregulated sales of dangerous, counterfeit, replica, and fraudulent products, indifferent to the damage they cause to consumers, legitimate sellers, and manufacturers. Amazon takes a transaction fee of up to 40% of each item sold.

Amazon must now figure out how to best manage the risk of product liability exposure against the revenue opportunity in enabling and facilitating an enormous number of counterfeit, fake, fraudulent, replica, and dangerous products on its websites.

In July, Amazon settled a $30 million battery fire lawsuit for a Li-ion battery-powered hoverboard fire that destroyed a couple's $1 million home and injured their two children.

Amazon is also facing a significant federal class-action lawsuit in U.S. District Court (Crosby v. Amazon.com Inc.) as the direct and repeated seller of fraudulent and potentially deadly Li-ion batteries. Amazon ignored two legal notices and continual complaints submitted for hundreds-of-thousands of dangerous, fraudulent Li-ion battery cells offered or sold on its websites. What makes this case particularly shocking is that Amazon's policy prohibits the sale of ALL individual Li-ion cells. Despite its stated policy, Amazon is often the direct seller of the dangerous and potentially deadly items while also allowing third-party sales, and continues to allow them.

How dangerous are fraudulent Li-ion batteries? This current Amazon listed flashlight headlamp includes a glaring consumer warning, "I just used it and it was dim so I put it on the charger. This thing exploded 20 minutes later. 1 battery has blew into thousands of pieces. I (sic) glad it didn't catch my home on Fire. I more grateful this didn't happen while I was wearing it."

In another product liability case, the Pennsylvania Supreme Court agreed in July to hear Oberdorf v. Amazon, after the 3rd U.S. Circuit Court of Appeals asked for the state high court's view on whether Amazon could be strictly liable for a defective product that was sold on its platform by a third-party vendor. Instead of litigating before the Pennsylvania Supreme Court, though, Amazon and Oberdorf resolved the case. Plaintiff Heather Oberdorf said she was blinded in one eye when a retractable dog leash she bought through Amazon's website snapped and recoiled.

Legislative and judicial intervention to protect consumers is notably lacking, thereby allowing fakes, fraud, scams and bad actors to flood Amazon's marketplace. Consumers are left to fend for themselves. 3rd. Circuit Judge Jane Richards Roth wrote in an Amazon ruling that Amazon may be liable because the company "enables third-party vendors to conceal themselves from the customer, leaving customers injured by defective products with no direct recourse to the third-party vendor." Adding; "There are numerous cases in which neither Amazon nor the party injured by a defective product, sold by Amazon.com, were able to locate the product's third-party vendor or manufacturer." (3rd. Circuit No. 18-1041)

In an academic paper set to be published next year in the Brooklyn Journal of Corporate, Financial & Commercial Law, two professors argue that Amazon acts as a "heavy hand" in its Marketplace, closely influencing purchases on its platform. "In our view," writes Aaron Twerski, a professor at Brooklyn Law School. "The courts do not grasp the magnitude of the problem or the reality of the situation." Amazon's "contention that it is a neutral platform that simply facilitates sales between sellers and buyers is a myth," they conclude. For most people, buying through Amazon means buying from Amazon. "You'd have to be a genius to figure out what's going on," Twerski says.

In contrast to the slow-moving US, Amazon was formally charged in the the European Union with antitrust violations for abusing its dominance in online shopping and using non-public data gathered from sellers to make informed decisions on its own products. Amazon may face fines up to $37 billion in the EU.

Amazon, facing a credibility crisis, has some explaining to do.