Cardi B Offers to Match Any Donation, After Criticism of Tweet Asking Whether She Should Purchase "88k Purse"

We love you but want you to learn from this, tweeted CardiB Fans 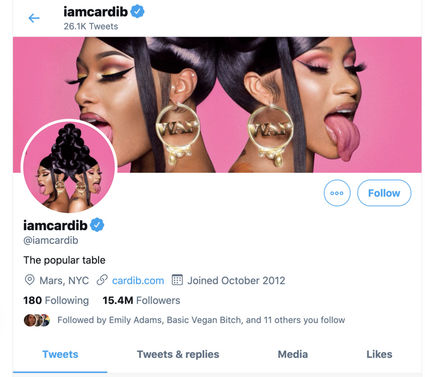 "I am a grateful recipient of $500 from you this summer..."tweeted one Cardi-B fan. "But you are not immune from criticism."

Rapper Cardi-B says she'll match anyone's donations, as a discussion about her charitable work emerged on Twitter. Some questioned her tweet asking fans if she should purchase an '88K' purse, presumably meaning one that cost $88,000.

"I was a grateful recipient of $500 from you this summer. Despite your charity, your tweet about spending 88K when people are literally struggling to survive is insensitive. Your charity does not preclude you from critique. We love you and want you to learn from this!" Tweeted Poor But Privileged. 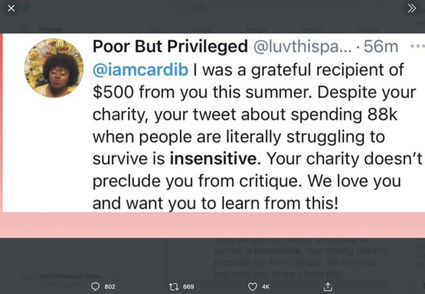 "I am a grateful recipient of $500 from you this summer..."tweeted one Cardi-B fan. "But you are not immune from criticism."

"You see ...so ya drag celebrities to not spend their hard workin money on things that they desire to donate but the same people that you donate too are the same people that's going to talk shit bout you In a couple of months?" tweeted Thinking face, referring to the WAP star.

"they not tryna talk #$%^ about you Weary face they just telling you that it was tone deaf of you tweet about that bag during a pandemic when a lot of people are struggling. thats it. tweeted @shaniyaMo24L.

Y'all annoying like I really cannot stand y'all Woman facepalming this woman ain't do a damn thing wrong, y'all always got this much energy for her but not for others Face with rolling eyes," tweeted @alqjdpsma.

"You didn't ask NOBODY what we did with that $500 but now they want to complain about how you want to spoil yourself some. Wow