Prostitution, Trespassing, Disturbing the Peace, Driving without a License and Loitering are now effectively legal in LA County 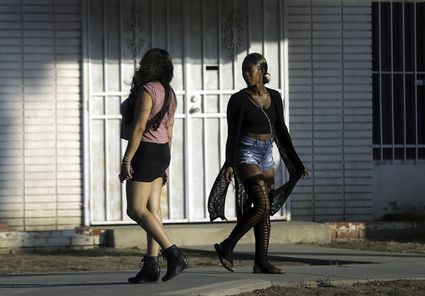 In this Wednesday, Nov. 15, 2017 photo, an undercover sheriff's deputy posing as a prostitute, left, talks with a woman passing by who identified herself as a prostitute in Compton. For hours, Los Angeles County sheriff's deputies listen to the same scenario play out over and over: men pull up alongside a woman pacing in front of an abandoned storefront in Compton and proposition her to have sex with him. They soon found themselves in handcuffs. The women were undercover Los Angeles County sheriff's deputies posing as prostitutes in a sting operation aimed at stemming the demand in the commercial sex industry.

LA's new DA will not prosecute women for prostitution. Nor will he imprison people for trespassing, disturbing the peace, driving without a license, or loitering. These are laws which historically are used to discriminate against black and brown people in white areas, says Gascon. He came to office with a mandate to change all that.

This is completely in keeping with what Candidate George Gascon said he would do if elected Los Angeles County District Attorney. "Elections have consequences," as former President Barrack Obama said in 2018.

Social justice warriors believe these are all statutes the white aristocracy uses to subjugate members of minority communities, institutionalizing racism. Resisting Arrest will also no longer be prosecuted.

Gascon will end the practice of charging minors as adults for murder and other serious crimes. He will extend victims services to the families of anyone shot by police. He will eliminate gang enhancements in criminal complaints, a practice Republicans initiated in the 1990s. He will have no cash bail, and the death penalty will no longer "be on the table."

A few reactions from social media:"Lemme guess the exemptions.

"1) trespassing won't be prosecuted unless it's a protest on a Hollywood elite, donor, or elected official

"2) disturbing the peace - Antifa rioting and looting, put peaceful protests outside of politicians houses to oppose tyranny will be cracked down on

"3) criminal illegal aliens with multiple DUIs won't be questioned and will get off scot free putting more lives at risk, while law abiding citizens will be cited for having a 10 day expired drivers license that they couldn't renew because the DMV still isn't fully open and keeps pushing everything back

"4) streets will be full of hookers everywhere "5) wonderful people will be encouraged do more mind altering substances knowing they can't get charged for resisting arrest, raising the likelihood of officer involved shootings which will create another excuse to riot, loot, and do mayhem with no repercussions. Meanwhile struggling small businesses will be prosecuted for the crime of trying to make a living while going above and beyond all the precautions set by the CDC." tweeted Alfonso the Deplorable.

"Gascon isn't going to realize anything. He's there to do a job, and that job is to turn LA into another crime-ridden hellhole the same way DA Larry Krasner did in Philadelphia when he ended cash bail there because it allegedly created...inequities. Now, crime will skyrocket in the LA area because a revolving door has just been installed in every police station in the county the moment Gascon was sworn in. The fact that the entire State of California voted overwhelmingly on November 3rd to NOT end cash bail in the state and now Gascon is unilaterally doing it on his own in LA County is outrageous. People should be furious about this and yes, it's going to be the Black and Hispanic areas that suffer the most." tweeted @realdonsteele

I think there would be less cop shootings if the cops didn’t escalate so quickly. NYPD “ I can’t breath” incident was cops posturing.