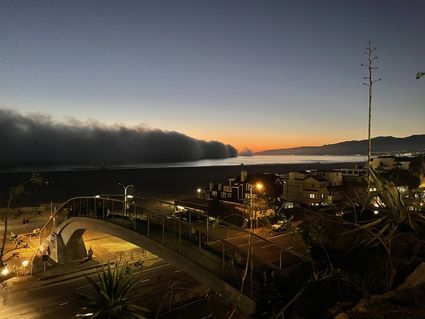 Local resident Steve Beauregard caught this photo of fog rolling into Santa Monica Bay Monday evening. The fog was unusually think and marked a change in the weather from unseasonably warm, to windy, to rain.

Fog is a common weather phenomenon along the entire coastline of California extending south to the northwest coast of the Baja California Peninsula, says Wikipedia.

The frequency of fog and low-lying stratus clouds is due to a combination of factors particular to the region that are especially prevalent in the summer. Another type of fog, tule fog, can occur during the winter. There are occasions when both types can occur simultaneously in the Bay Area.

The Pacific Ocean contributes to the frequency of fog by providing atmospheric moisture and by its temperature. It is also the major source of nuclei for the condensation of moisture from vapor into cloud droplets. Moisture evaporated from the ocean surface over hundreds, even thousands of miles of the open Pacific is carried to California from various directions. This water vapor contributes to the development of what is called a marine layer near the surface of the ocean.

Along the California coast, the prevailing current flows from the northwest and is cool owing to its origin in the North Pacific. Additional cooling occurs due to strong upwelling of cooler subsurface waters, especially along the immediate coastline and near various promontories. Sea surface temperatures along the coast are generally 52–58 °F (11–14 °C) year-round.

When the marine layer encounters the colder waters along the California coast, it cools to its dewpoint, and if small particles called condensation nuclei are present, liquid water drops will form. Condensation nuclei in coastal fog are mostly composed of salt from surf and spray, with lesser amounts of iodine from kelp. These nuclei are so effective that condensation can occur even before the dew-point is reached.