Test positivity rate went from 18 percent to 5.6 percent in less than a month when 75 percent of force vaccinated 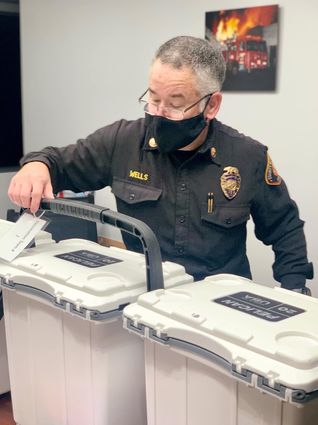 The Los Angeles County Fire Department (LACoFD) has experienced a drastic decline in the test positivity rate and number of individuals out sick with COVID-19 within its workforce.

"With a nearly 75 percent acceptance rate in our Department, the COVID-19 vaccine is allowing us to keep our first responders on track to stay as healthy as possible during these most challenging times of the pandemic," said Fire Chief Daryl L. Osby. "With the second dose of the vaccine now being given to our team members, this will provide another layer of protection and allow us to continue to seamlessly provide the highest level of care to our patients." 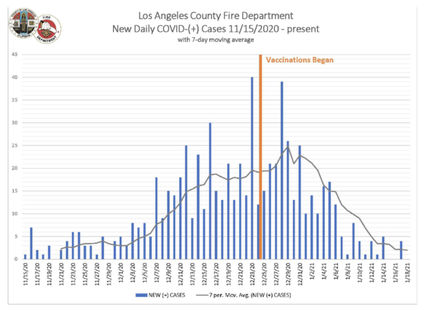 The LACoFD's Emergency Medical Services Bureau coordinated its first vaccination clinics Countywide in late December 2020, administering more than 3,000 vaccines to team members. At the time, the Department was reporting COVID-19 test positivity rates equivalent to that of the County's rate of 18 percent. In the weeks since the first vaccination clinics, the Department has steadily reported and documented steep declines in its COVID-19 test positivity rates from its highest weekly average of 18 percent to its current rate of 5.6 percent.

"As expected, the vaccine began to have its impact seven to ten days after the first vaccines were given," said LACoFD Medical Director Clayton Kazan, M.D. "As the County continues to surge, new cases among Department personnel began dropping precipitously as did our test positivity rate. This is the first time in the entire pandemic that our data diverged from that of the County."

This week, LACoFD physicians, pharmacists, nurses, nurse practitioners, and paramedics will administer the second dose of the COVID-19 vaccine to team members, including Fire Chief Daryl L. Osby who will join other first responders at Fire Station 54 in the City of South Gate.