From a Total of 22 Individuals, Condors Now Number Over 520, and the Latest Was Hatched This Summer at the Los Angeles Zoo 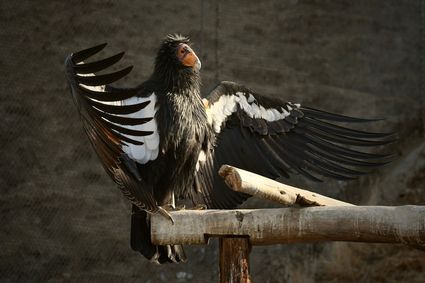 In 1982, California Condors, magnificent birds with a wingspan of over 9 feet, were all but extinct. Only 22 individual birds were left. But since the inception of the California Condor Recovery Program, this number has swelled to over 520 birds. Over half of them are in the wild. The rest contribute their DNA to breeding programs such as the one at the Los Angeles Zoo and Botanical Garden.

The 1,720th bird to be recorded in the program was hatched this summer at the LA Zoo, but not without plenty of drama. Even before the egg was laid, keepers were uncertain the pair set together to breed, Sequoia and Squapuni, would get along as they both had strong, domineering personalities. To everyone's relief the two ended up bonding closely and this summer produced the egg designated LA1720.

But even as LA1720 stirred excitement in August when movement was detected inside the egg, concern was also raised. The chick was malpositioned in the egg. Keepers recorded and monitored the chick's growth and movement in the laboratory while a dummy egg was placed in the adult condors' nest box for them to tend.

All seemed well until a week before the chick was due to hatch. The tiny unborn creature showed signs of decline. The condor team took a chance and did a "manual pip," creating a tiny hole in the shell in order to activate the chick's lungs. Because bacteria might be introduced this way, antibiotics had to be administered via syringe, taking care not to touch the chick with the needle.

When the chick hatched a few days later, all seemed to be well, the dangers behind the creature. But LA1720 was not done presenting challenges to the condor team.

For three days, the three keepers involved monitored the chick, feeding it carrion, wiping its umbilicus area and cleaning its bottom. Then came the task of introducing the real chick to the parents, who were still tending a false egg. Keeper Mike casually walked up to the next box while the parents happened to be away, removed the dummy egg, and replaced it with LA1720, complete with a partial egg shell for verisimilitude. The ruse worked! Sequoia and Squapuni accepted the chick with love and devotion, immediately brooding, nurturing and preening the little creature. 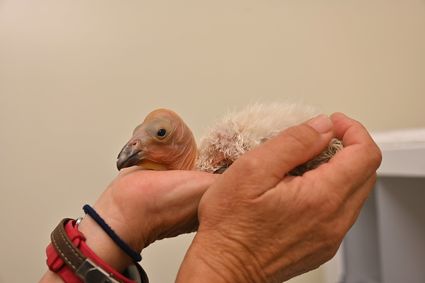 Near tragedy struck again two weeks later, when keepers noticed LA1720 was suddenly struggling to breathe. The chick was swept back into the laboratory and administered oxygen overnight. With its breathing returning to normal the next day, another stealthy transfer was attempted to sneak the chick back into the next box. The adult birds, after a moment of mystification, returned to their duties as parents.

Today, LA1720 is nearly as big as its parents, fully fledged and testing its wings. Its sex is not yet known, as is the decision on whether or not it will be kept for breeding or released into the wild. Meanwhile, the Zoo is accepting donations for votes on a name for the chick. To vote (and get a T-shirt), go to "Miracle Chick Needs a Name."

Whatever its sex or name, LA1720 proves that people can make a positive difference for nature and its glorious creatures.