Initially, the renewed restrictions on gatherings and the closure of outdoor dining in LA County were explained as necessary because of a steep rise in the number of COVID-19 infections reported, but the numbers are now higher than at the time of the restrictions 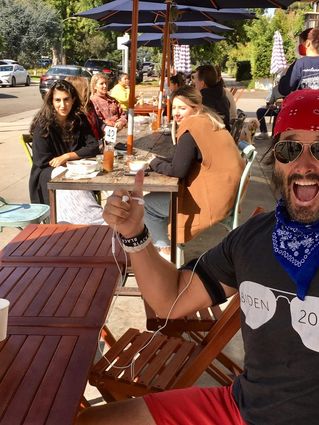 January 26 - On Monday, following an announcement by California Governor Gavin Newsom that the state was lifting its Stay Home Order, the LA County Public Health Department also announced an easing of restrictions. The County's directive aligns with the state and allowed the immediate opening of:

These sectors had been closed on December 6 because the ICU capacity of the county had fallen below 15%. This was the number determined by the state's health department to trigger a Stay Home Order and the closure of these sectors.

On Friday, the county will allow the reopening of outdoor dining, which has been forbidden since November 24.

The rationale for the abrupt change in attitude toward the prevailing Stay Home Orders was not well explained by either state or local officials. Initially, the renewed restrictions on gatherings and the closure of outdoor dining in LA County were explained as necessary because of a steep rise in the number of COVID-19 infections reported. The five-day average of cases per day rose above 4,000, the number officials had decided should trigger these restrictions. But on January 25, the number of daily cases was far higher than that: 6,642 new cases. If the number of new cases was to be a criteria for reopening outdoor dining, deemed too dangerous at 4,000 new cases, why is it now safe with 6,642 new cases a day?

As for the ICU capacity of the county, it remains well below the 15% capacity that had earlier been considered a trigger for the Stay Home Order and closure of hair salons and museums. On January 24, there were only 51 available adult ICU beds, according to County data. This is similar to or less than the number of available beds on December 6, when the sectors were originally closed because of a lack of ICU beds.

It is true that the number of cases of COVID-19 have been falling in Los Angeles County. During the earlier part of January, the number of average daily cases hovered near 15,000 per day. Public health officials, elected leaders, and the media have been delivering the steady message that the surge in cases, and consequent deaths, was the fault of a public unwilling to follow public health orders, stay at home, and socially distance. Now they appear to be telling us that, actually, the public did such a good job at following public health orders, staying at home, and socially distancing that the worst of the danger is past and we can come out of our homes again - albeit timidly and with restraint.

Here are some possible conclusions.

1. The spread of COVID-19 through the community is actually unrelated to the behavior of the public. Imposition of restrictions is merely political theater in order for officials to avoid blame and look effective. Now that the restrictions have become so unpopular and caused so much economic havoc, officials feel it is time to move in the opposite direction. 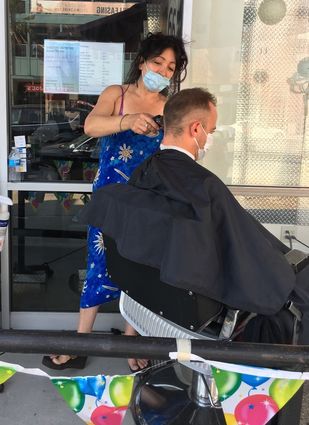 Haircuts may now be obtained again

2. The spread of COVID-19 may or may not be affected by the behavior of the public. Political expediency, however, dictates restrictions be lifted at this time regardless. Governor Newsom is facing a recall effort that appears to have a good chance of success, with well over a million signatures collected toward a required 1,495,709. Petitioners have another six weeks to get the signatures they so far lack. His lockdown policies have decimated the state's economy and been widely unpopular. Once Newsom gave them cover, Los Angeles County officials seized the opportunity to regain their own tarnished popularity. The ban on outdoor dining, in particular, has been targeted for both legal and scientific challenges. The county was forced to admit in court they had no evidence to support the effectiveness of banning outdoor dining on reducing COVID spread. Some have asked if banning outdoor dining did not encourage people to gather indoors and thus spread more COVID that way.

3. The spread of COVID-19 is closely related to the behavior of the public. Allowing people to gather, even outdoors, and to visit hair salons and gyms will cause the infection numbers to rise and we will revisit the lockdowns we are now surrendering to political expediency.

Only time will tell if officials are releasing restrictions too early - or if those restrictions were completely ineffective in the first place. Only time. Public health officials claiming knowledge of how the intricate interweaving of public behavior and virus infection will affect case, hospitalization, and death rates are no better than lying snake-oil salesmen.