A Chilean Tale of Love. Another Striking Entry in the LGBT International Movie Releases.

"THE STRONG ONES", a movie released in 2019, the latest work of Omar Zúñiga Hidalgo 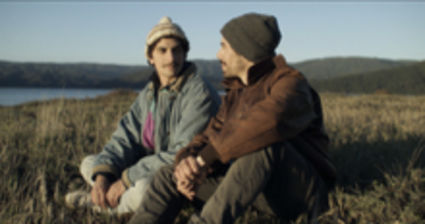 The Tale of a romantic and authentic love story that takes place in Chile between young men named Lucas and Antonio.

This is what "Los Fuertos", or "The strong ones" wants to answer. This movie came out in 2019, and it is the last work of Omar Zúñiga Hidalgo.

It is the tale of a romantic and authentic love story that takes place in Chile between a young man named Lucas and Antonio. Lucas goes to visit his sister Catalina and suddenly falls in love with a local fisherman, Antonio.

Lucas is in search of freedom and he thinks that the only way to find it is by leaving Chile.

This feeling of being trapped comes from the fact that his parents don't accept his homosexuality and because of this Lucas cut contacts with his parents.

On the other hand, Antonio is trying to extricate himself from a dalliance with a married man, a shipmate named Roca and at the same time he is purchasing a fishing boat of his own.

Lucas and Antonio spend a joyful time together, full of passion and love. Their relationship is represented with such an unforced naturalism that the observer is able to empathize with them as they were part of the movie himself.

This movie is characterized by everyday elements which will make the story more spontaneous and natural, moreover, will help to define more of the psychology of each character.

It is fundamental to point out the passion and attention dedicated to details for this is essential to get the message of the movie itself. Details are usually strictly related to how the characters think or how they behave therefore analyzing what is "behind the curtains" is crucial to understand the unfolding plot.

Watching a movie should be an unforgettable experience that goes beyond the purpose of entertaining and "Los fuertes" will be an overflow of powerful feelings as well.

Like many of us Lucas and Antonio are just figuring out their place in the world making this movie relatable to many of us.

On a daily basis we are called to face our fears because life is about finding who we really are, what motivates us, what our passions are...

Life is a long journey which lead us to take difficult choices and even though this can be hard, it also makes us grow as humans. Just like Lucas and Antonio we are all trying to achieve something and if an opportunity comes along we should try to be brave and embrace it.

However, expressing ourselves is not always easy because we may be afraid of other people's opinion, especially for what concerns sexual orientation...

There are a lot of people who are unable to express their love freely due to various reasons and Omar  Zúñiga Hidalgo magnificently represented the pressure that some people feel nowadays with his movie.

This movie talks about life, emotions, freedom and it is sure to win your heart!

Writer and director Omar Zúñiga Hidalgo shares his thoughts with the Observer.

-What inspired you to write this movie, what is the story behind this movie?

When I first started writing the film, more than six years ago, I wanted to create a love story between two men unlike most of the ones that I had seen before. I wanted to celebrate their autonomy, and their independence, with two characters who are very different, who are looking for different things in their lives, but who find love when they least expected it. I wanted to celebrate this love, in an honest and raw way, and to tell

this story without any denial, guilt, or trauma, or discovery, in a way that I have not seen enough of. And I wanted to have two characters whose lives are not only defined by their sexuality, where that is just one part of the complex people that they are. They are able to find their place in the world, and I wanted to celebrate their bravery, the resilience they have against the waves that come crushing at them.

- The movie contains themes such as homosexuality, love and freedom. Is it correct to say this movie wants to send a message of hope around the world to all of those who only wish to live their love freely?

Sure, I would think so. The film talks about the idea that we deserve to live the lives that we want, in the communities that we are in. People can receive death sentences for their love, in multiple countries of the world we live in today. When you live a comfortable life, you forget that there is endless amount of pain in other places, that human beings do not deserve. I want us to empower ourselves, to fight for our dignity, in an unapologetic way.

- The LGBTQ+ community is still subject to various forms of discrimination. Discrimination is not only unacceptable, it also has a strong repercussion on society and its growth. This thematic appears in the movie and in the telling of the love story between Lucas and Antonio...What do you believe are the main steps to take to end such discriminations?

First of all, I think that we need to have our own understanding of our own dignity and value. That's why I did not want these characters to have any shame or denial or regret about who they are (which by the way keeps appearing in fiction, even in the mainstream). I think that visibility matters, in all aspects of life, not only the arts, but also public office, education, etcetera. And obviously, political activism, supporting local organizations that can represent us before governments, collective action. And solidarity between countries, there are places where all of this is not even a discussion, but sometimes those places do not realize how privileged they are.

- How do you relate with these two characters Lucas and Antonio? Is there something about yourself or life experience that can reflect on the two protagonists?

The film is very personal in many ways, and I do feel very close to both of them. The film is about things that I know and have lived, things that I have seen around me. Lucas is the one that is probably closer to my own life experiences: moving, or a complex relationship with my family. At the same time, I wish I was as doubtless as Antonio is, to have his clarity, determination.

- What do you believe are the three adjectives that better describe your movie?

Wow, this one is hard! I would say daring, honest, sexy.

- Which one were the best, most inspiring moments while directing "The Strong Ones"? 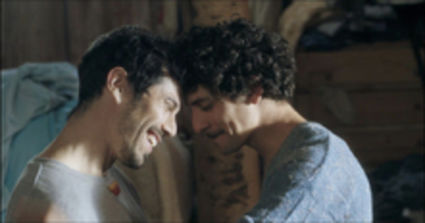 Lucas goes to visit his sister Catalina and suddenly falls in love with a local fisherman, Antonio.

There were so many. I am in awe of the work that both Samuel González and Antonio Altamirano do in the film, we worked very closely together to create that loving relationship on screen. One moment that I remember particularly is when they have an argument outside of a bar, later in the film (I don't want to spoil too much for anyone that hasn't seen it yet). The moment is very moving, and I cried when we were shooting it, there was a spark that was magical in their intimacy, their truth. We also shot a sequence that takes place in a carnival, and we shot it during an actual carnival that takes place in Valdivia, which implied a lot of previous coordination to get what we wanted, but it was a beautiful moment we all shared in the middle of a huge crowd.

- After this movie success, what are your prospects for the future?

I am currently writing a new film that I would like to make. In our production company, Cinestación, we are also planning on shooting two films by two first-time Chilean directors, both of which we will hopefully shoot this year, in this ever-changing landscape with the pandemic. We will also launch The Strong Ones in a few other countries during 2021, and we want to promote it as much as possible.

PLEASE GO ON THE BELOW LINK TO WATCH THE MOVIE AND ENJOY!: https://www.bgpics.com/movies/the-strong-ones/