How do Amazon, Walmart and eBay Get Away With Selling Counterfeit and Dangerous Products? This is a $1.3 Trillion Industry in Fakes 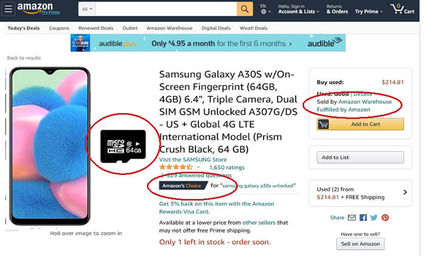 February 2, 2021, Los Angeles, CA – The U.S. e-commerce business keeps on growing. Online shopping due to COVID-19 has contributed significantly to the growth and to the proliferation of counterfeit products available on Amazon, eBay, and Walmart.

"Many consumers are ... unaware of the significant probabilities they face of being defrauded by counterfeiters when they shop on e-commerce platforms," reads a January 2020 Department of Homeland Security report (PDF) recommending measures that would force e-retailers to take counterfeits more seriously. "These probabilities are unacceptably high and appear to be rising."

Counterfeits threaten national security and public safety directly when introduced into government and critical infrastructure supply chains and indirectly if used to generate revenue for transnational criminal organizations. Yet, the U.S. Government recently approved purchases of equipment and supplies up to $10,000 from Amazon's fraud-laden marketplace.

The U.S. Government Accountability Office (GAO) made test buys on the websites of five top e-commerce websites in 2018, including Amazon, Walmart, and eBay. The GAO reported that nearly half of the 47 items it purchased turned out to be counterfeit. Algorithms push the cheapest options to the front page, making counterfeit goods the first and potentially only option consumers see when shopping online.

Many ask: How do Amazon, Walmart, and eBay and other online retailers get away with selling counterfeit products online? The answer is the law. In legal disputes, these giants argue that they are not the seller and therefore cannot be responsible for any liabilities from third-party sellers. Courts have yet to find Amazon and other retailers liable for selling fake products on their sites because the companies have successfully argued that they are the platform for sellers rather than a seller itself. They have convinced the courts that goods purchased on large e-commerce platforms are often not sold by the platform itself but instead are sold by third-party sellers, skirting liability.

However, Amazon is often the direct seller of counterfeit and fraudulent goods and can't deflect responsibility to its third-party sellers. Some of Amazon's fakes even carry the "Amazon's Choice" endorsement.

For example, the Samsung phone offered below by Amazon Warehouse and Fulfilled by Amazon has no U.S. warranty and is bundled with a counterfeit 64GB microSDHC® card. A 64GB microSDHC® memory card does not exist in the microSDHC standard therefore, no legitimate manufacturer provides one. However, this fraudulent item carries the "Amazon's Choice" endorsement and 1,650 have been reported sold. Amazon ignores brand-owner complaints to remove the listing and many others.

Some in Congress have tried to close this legal loophole. A bipartisan group of representatives introduced the Stopping Harmful Offers on Platforms by Screening Against Fakes in E-Commerce Act (the Shop Safe Act 2020) to help stem the explosion of counterfeit products that are flooding the marketplace on e-commerce platforms. The legislation was one of several introduced in Congress aimed at addresses the growing concern over counterfeit products. The Shop Safe Act proposes to amend the Trademark Act of 1946 and establish contributory trademark liability for online marketplaces based on the sale of counterfeit products by third-party sellers on their platforms. The consumer protection legislation has stalled in Congress.

If you are still wondering how big the online counterfeit and fraudulent product problem is, it is a $1.3 trillion global criminal enterprise. A Wall Street Journal investigation revealed that Amazon has listed "thousands of banned, unsafe, or mislabeled products," from dangerous children's products to electronics with forged certifications as well as trash recovered by dumpster-divers. Three United States Senators are demanding Amazon recall hazardous "Amazon Basics" labeled products after an investigation revealed the products melted, burst into flames, or exploded. The Verge reported that even Amazon's listings for its own line of goods are "getting hijacked by impostor sellers." CNBC found that Amazon has shipped expired foods-including baby formula-to customers, pointing to an inability to monitor something as basic as an expiration date. As a result of Amazon's unwillingness to stop counterfeit goods, Nike announced that it stopped selling on Amazon.

Until the law changes, the bottom line is that e-commerce platforms have no incentive to stop the abundance of counterfeit products sold on their platforms. When it comes to buying products on Amazon, Walmart, and eBay, buyers need to be aware. Don't be deceived -- If a Price Seems Too Good to Be True, It Probably Is.