26 second long Fake Video with 26 million views on Facebook is not actually from NASA at all. 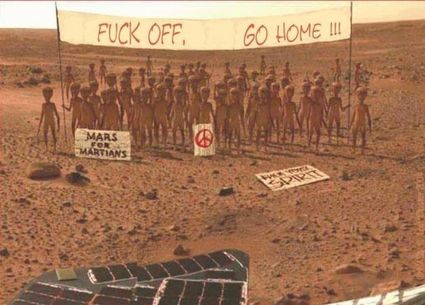 A 26 second fake video going viral on social media is not from Mars, and not even from NASA.

While NASA did land Perseverance on Mars, many on the internet are unintentionally sharing a false video. The 26 second fake video claimed to be from Mars Perseverance rover goes viral. The video may be seen here: https://twitter.com/SMObserved

The real Perseverance will include sound generated in the thin Martian atmosphere, about 1/90th as thick as Earth's atmosphere. There is believed to be sound on Mars, but no where near as detectable as on our planet.

Mars 2020 is a Mars rover mission by NASA's Mars Exploration Program that includes the rover Perseverance and the small robotic helicopter Ingenuity. Mars 2020 was launched from Earth on an Atlas V launch vehicle at 11:50:00 UTC on 30 July 2020, and confirmation of touch down in Jezero crater on Mars was received at 20:55 UTC on 18 February 2021. As of 21 February 2021, Perseverance has been on Mars for 3 sols (3 total days; 3 days) since landing.

Perseverance will investigate an astrobiologically relevant ancient environment on Mars and investigate its surface geological processes and history, including the assessment of its past habitability, the possibility of past life on Mars, and the potential for preservation of biosignatures within accessible geological materials. 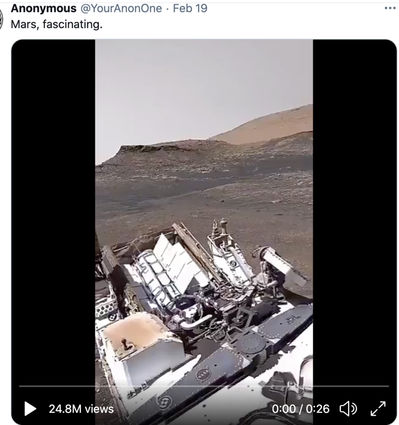 A 26 second fake video going viral on social media is not from Mars, and not even from NASA.

It will cache sample containers along its route for retrieval by a potential future Mars sample-return mission. The Mars 2020 mission was announced by NASA on 4 December 2012 at the fall meeting of the American Geophysical Union in San Francisco. Perseverance's design is derived from the rover Curiosity, and it uses many components already fabricated and tested in addition to new scientific instruments and a core drill. The rover also employs 19 cameras and two microphones, allowing for audio recording of the Martian environment.

The launch of Mars 2020 was the third of three space missions sent toward Mars during the July 2020 Mars launch window, with missions also launched by the national space agencies of the United Arab Emirates (the Emirates Mars Mission with orbiter Hope on 19 July) and China (the Tianwen-1 mission on 23 July, with an orbiter, lander, and rover).