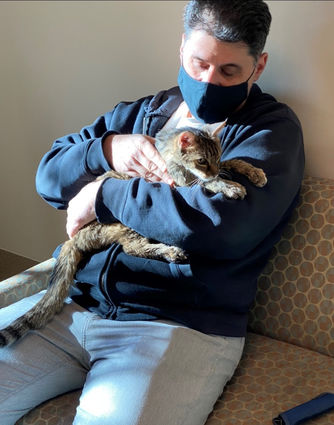 Charles and Brandy the cat together again

On February 21, 2021, Officer Luis Leal from the Los Angeles County Department of Animal Care and Control received a field call to assist an injured stray cat on the front porch of a Palmdale residence. Officer Leal immediately responded and brought the cat back to the Palmdale Animal Care Center where she was cared for and despite her injury, she was found very alert, healthy, happy and friendly interacting very well with the staff.

Fortunately, Officer Leal scanned the cat and was able to locate a microchip! The microchip traced back to a gentleman named Charles. Initially, Officer Leal made an attempt to contact the owner but was unsuccessful. As a result, Officer Leal left a message for Charles that his cat was found and is being cared for at the Palmdale animal care center.

On February 22, 2021, Charles called back and spoke with Sergeant Valles at the Palmdale animal care center. Charles was very confused and asked why he was receiving a call from animal control because he does not own any pets. Then, Sergeant Valles advised him that a cat was found in the City of Palmdale and her microchip information was linked back him.

Charles was completely shocked to hear that his cat "Brandy" was located as he had not seen her in over 15 years. He was so happy you could hear it in his voice over the phone. Charles was very emotional and continued sharing with Sergeant Valles that "Brandy" went missing over 15 years ago and he never thought he would see her again. 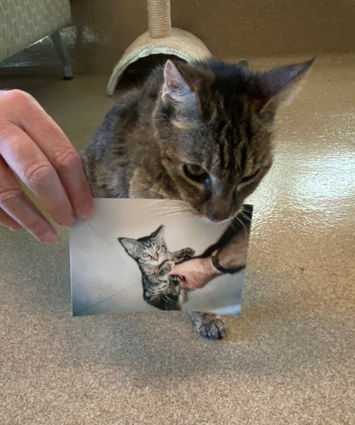 Brandy now and then

Sergeant Valles then asked Charles if he was interested in picking up "Brandy" and taking her home. His reply was "yes, adoption is forever".

Charles was very pleased to hear that "Brandy" was alive, alert and in overall good health. When Charles arrived at the Palmdale animal care center, he was greeted and directed by Palmdale's compassionate and friendly care center staff to spend time with "Brandy" in the "Meet Your Kitty" room. Once reunited with "Brandy" there was an instant connection that appeared to be unbroken even though Charles and "Brandy" only shared a few months before being separated for so long.

It was wonderful to see the beautiful reunion! DACC encourages all pet owners to microchip their pets because without the microchipping of "Brandy" and the diligence of the officer, this reunion would have been impossible.