California Quietly Okays Vaccines for Inmate Population; Nobody is Willing to Say They Made the Decision or Talk About it

State prisoners were given the vaccine before the state's unincarcerated elderly. Apparently health officials didn't want to have to quibble about that. 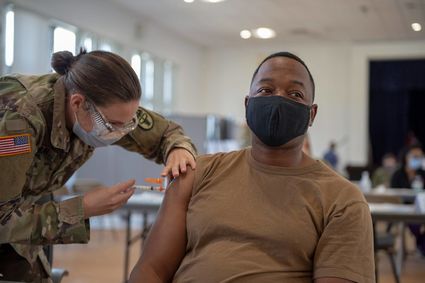 March 9, 2021 - The California Department of Corrections, which runs the state's prisons quietly began offering Covid-19 vaccines to the staff and also incarerated individuals at the state's prisons on December 22, 2020. Vaccinations for frontline workers, the first given in the state, only began shortly before this date. Individuals over 65 years old were not eligible to sign up to get the vaccine until mid-January.

As of March 7, there have been 42,397 inmates who have received the vaccine and 25,885 prison staff members. Out of the 10 million-plus shots given out statewide, this is not a very large number. Nor is there much argument that it isn't vital to protect a population involuntarily held in densely congregated quarters.

But why wasn't this sector of the state's eligible population listed on the well-publicized state tiers for vaccine distribution? We were told about frontline workers getting vaccinated first. We knew that people over 65 were in the next phase, and we were informed of the following phase to include educators, food industry workers, and emergency services workers. Never was the inmate population mentioned.

Requests for information from the California Department of Public Health about this omission and how about who had made the decision to inoculate inmates were not answered. Indeed, media officers for the CADPH are almost completely unavailable. They work remotely and, over the course of a full year, have not figured out how to forward the work telephone to the phone where they are located. An email was finally answered with this helpful information: "Please contact CDCR for information on state prisoners."

The CDCR media officers were also only available by email and were not answering their telephones, a state of affairs the recording informs us has subsisted since March 13, 2020. (Apparently, they also need lessons in call forwarding technology.) By email, the CDCR would not release any information about who had made the decision to inoculate prisoners. They claimed, however, to be administering the Covid-19 vaccine "in alignment with California Department of Public Health (CDPH) guidelines." 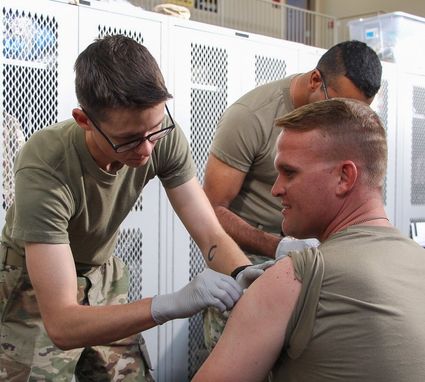 Flu shots being administered in October of 2019 to enlisted men

The total population of in-custody individuals in the state is 94,735, about the size of Santa Monica. To date, 212 prisoners have died of Covid-19 or complications thereof. In Santa Monica, 152 people have died of Covid-19. The major difference between the populations, of course, is that people in Santa Monica can choose how isolated from infection they can make themselves. An incarcerated population is forced into close proximity and sharing of facilities. Why state officials have been timid about revealing their decision to inoculate inmates and have avoided publicizing this decision is baffling. And suspicious.