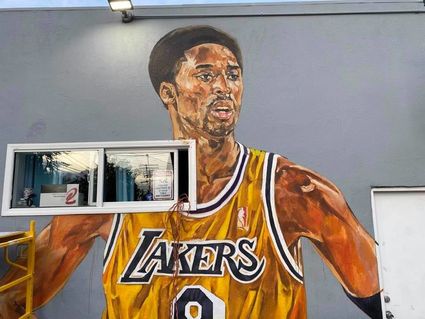 I wanted to update you on my work. We were approached by the owner of American Credit Repair at 12237 Wilshire Blvd while i was working on a Covid-19 mural featured in the Observer.

Mr. White told me that he was interested in a mural of Kobe Bryant, and that his business location was a mile up the street on Wilshire in West LA.

I had been meaning to do one of the late great Kobe, since he has meant so much to the Los Angeles and actually all around the world. His work ethic was second to none and he had the "MAMBA" mentality which is the mentality to over achieve and to be great.

We came up with a concept for the mural: "MAMBA mentality starts here."  But it turned out that might have legal implications. We reached out to some lawyers and they advised us to stay away from that quote. It could be perceived as disrespectful to Kobe's widow Vanessa Bryant, and some said it might be poor taste, to apply his brand to anything commercial oriented.

So we went with "Greatness Starts Here," as in come get your credit score fixed a you can live the life of greatness.

My assistant Calvin Kosciuk and I executed the mural, using a combination of enamel and spraypaint. 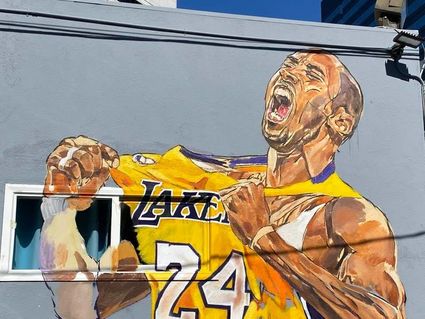 We went with the beginning of KOBEs career with the Lakers, when he wore the Number 8 Jersey and played in the championship finals with the Pacers. We also paid tribute to the end of his career, when he was number 24 and played against the Celtics.

He was truly inspirational and motivated the city and the whole world to greatest version of themselves. We were honored to paint this mural for such an iconic figure.

As artists, we felt we had a duty of executing one of the better Kobe murals, so that his family and fans can actually feel stoked on seeing them, even with Kobe gone but not forgotten.