Lockdowns Were a Disaster: Public Health Should Have Been Achieved Via the Carrot Instead of the Stick: Santa Monica Shines COVID-19 Assurance Program is Almost an Example

Though the program is free, it requires businesses to come under government scrutiny they might otherwise - and for very good reason - avoid, and this is a fatal flaw. 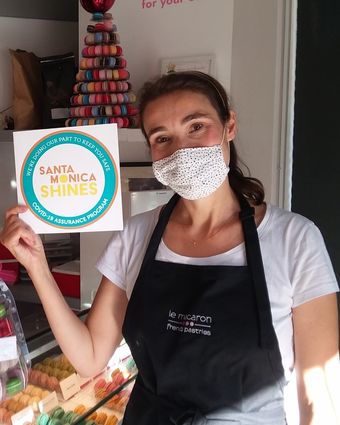 UPDATE/CORRECTION: The Santa Monica Shines program does not involve inspections from city of Santa Monica code inspectors. Sustainable Works conducts the walk-throughs to grant the Assurance Seal and they are a separate entityt hired by the city.

The empathy course that seems so mysterious involves guidance in how to interact with business customers or guests who do not want to follow the county's safety guidelines, i.e. are refusing to wear a mask or socially distance.

Half of the businesses that did receive the Assurance Seal are restaurants. Being able to display an assurance seal in a restaurant window is a beneficial adjunct to the letter grade already given restaurants by the County Department of Public Health.

March 17 - As Los Angeles County moves from the purple to the red tier - the first relaxing of restrictions since March 19, 2020 - the City of Santa Monica is looking for ways to keep the public safe as Covid-19 infections appear to wind down and residents are allowed more freedom of movement and activity. They've sent out a press release reminding businesses, large and small, they can earn a Santa Monica Shines Assurance Seal to display at their locations if they complete a safety protocols course. This will "show employees and guests that they take their safety seriously," says Susy Borlido, Co-Executive Director & Green Business Program Director at Sustainable Works.

The Shines Assurance Program was launched in August. It is the right idea to have offered businesses a positive reason to assure public health and a means for them to compete with other businesses who had not done so. This should have been the primary, if not sole, method of government to engender public health safety: a standard by which businesses could compete with each other for public confidence in their safe health practices. This is the means by which government should have instituted restrictions on number of people inside a business, hours of operation, and even masking. Grades to businesses could have been given based on how many of these voluntary recommendations had been taken.

And then the public could have chosen, based on each individual's own risk threshold, which businesses they were willing to patronize.

To date, one could not call Santa Monica's Shines Assurance Program a brilliant success, however. Only 243 businesses have registered for the seal and of that number only 90 - 37% - have received it. There are several reasons for this lack of participation, none of which argue against the contention that rewards and public assurance of the meeting of set standards would have been the way to go in handling public health.

1. Though the program is free, it requires businesses to come under government scrutiny they might otherwise - and for very good reason - avoid. The final step of the Assurance Program is an on-site or online walk-through of one's place of business. Santa Monica is notorious for fining businesses over an excessive number of overreaching codes and laws. Why invite code officers to your location if you don't have to?

2. The program is a time sink. It requires businesses, already burdened with an ever-shifting set of rules from County Health, to take on yet another set of rules. A 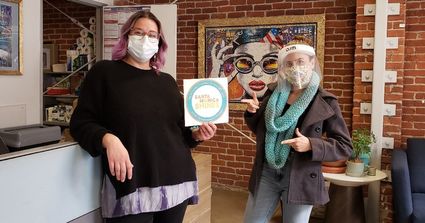 Blankspaces displays their Assurance Seal, achieved by signage urging mask-wearing and spacing of tables and seats

Safety Supervisor has to be designated, a questionnaire answered. Then all of your employees have to take the online safety and empathy course. Even after all of that, you will be required to take "micro-courses and micro-lessons" and accept weekly pre-shift meeting agendas.

3. What the hell is an empathy course? What does empathy have to do with methods for preventing the spread of a virus? This appears to be the insertion of some type of woke ideology that has no place in assuring the practical steps to be taken regarding health safety.

As usual, Santa Monica has shot itself in the foot by creating an atmosphere of rightful distrust from its area businesses. Unfortunately, it is the residents of the city who lose out when our officials abuse the businesses who help pay the bills.