Police chief has promised a Pier patrol detail over the weekends - is it too little too late? 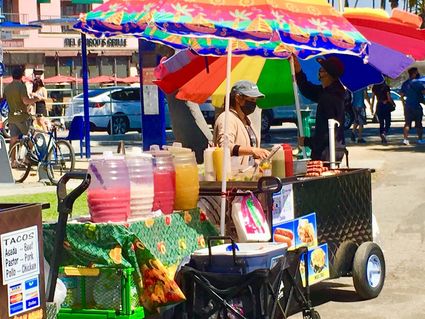 Pushcart vendors owned by the Murcia family gang operate daily on and around the landmark Santa Monica Pier with no permits and completely outside of the law. The city does nothing, seeking to avoid the optics of authorities cracking down on vendors.

A fight that broke out among pier vendors on Sunday afternoon highlights a persistent and dangerous problem at the Santa Monica landmark: criminal gang involvement in illegal street vending.

Several police officers were called after a fight began in the parking lot just north of the Santa Monica Pier at 2:30 on Sunday afternoon. After the fight was stopped, with great difficulty, six individuals were eventually cited and released. According to a highly placed government official, all of the individuals involved in the fight were part of the Murcia family gang.

In late September, SMPD were called, again on a Sunday afternoon, to break up a fight between two street vendors. In this case, a Murcia family member was after a vendor who was not part of their group. One of the combatants cut the other with an umbrella and was actually charged: assault with a deadly weapon.

The Murcia family brings in all of the vendors who operate - illegally - on the pier. According to the city official, every day members of the Murcia family bring 30-50 carts to Santa Monica, where they disperse to the Pier, the Boardwalk and Palisades Park. Although a 2019 law, SB 946, the Safe Sidewalk Vending Act, decriminalizes street vending in public places, it allows local governments to enact their own regulations, and Santa Monica did so. Vendors must obtain permits to operate on the pier, get a California Seller's Permit, and if selling food, obtain an L.A. County Health Permit. City permit fees for operating on the Pier are as high as $1500/month during the summer. None of the Murcia family's vendors have permission to operate on the pier - yet they do so every day. Apparently, vendors must pay a required fee to the Murcia family for this service and their protection. If they do not, they will be beaten.

If you are wondering what happened to the police department, they say the operation of illegal vending carts on the Pier is a code enforcement and not a law enforcement issue. They will not wade into the fray.

If you are wondering what happened to the fire department and the concern they should have about the operation of open fires on the wooden pier, they simply won't show up to inspect the situation. They were asked to do so, and they did not. 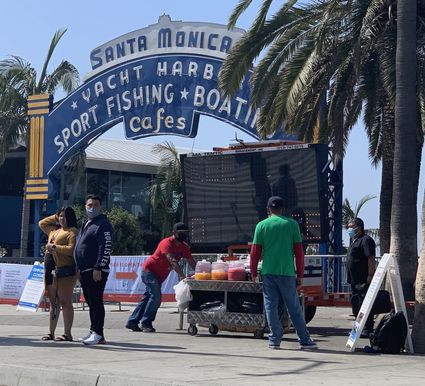 Pushcart vendors owned by the Murcia family gang operate daily on and around the landmark Santa Monica Pier with no permits and completely outside of the law. The city does nothing, seeking to avoid the optics of authorities cracking down on vendors.

One city resident who visited the Pier two weeks ago counted over a dozen hot dog vendors - all illegal, with unpermitted butane tanks. There were an estimated 7,000 visitors on the Pier, and not one single safety officer of any kind - police, fire, or otherwise.

The lack of willingness to enforce the law and protect the public would be truly astonishing if it were not, unfortunately, completely predictable. This city is composed of people who want to save the world - but have no interest in cleaning up their own backyard.

Pier patrol???? There's a SMPD substation ON the pier. So stupid. If I park in a metered space, I can get a ticket in 2 minutes from code enforcement, but they're afraid of the pier.

Is it me or is Palisades park slowly deteriorating

SMPD has done all they can, within the law. Remember, SB 946 decriminalized the vendors activity, so basically any “enforcement” is strictly administrative. Or in other words, useless. Your complaints need to be heard by our state legislators to reverse this ridiculous law. I have also witnessed SMPD Officers getting yelled at by the public, while attempting to address this major health and safety issue. Do we want to live in a completely lawless society? By slowly chipping away at laws that exist for our benefit, to appease a small segment of the public who refuse to obey the law, our “representatives” are doing just that. Stay safe.

Cant get an Airbnb in SM, but let a crime family run this landmark! I walked thru the maze of vendors 2 weeks ago trying to access the pier from Ocean Ave. It is a hazard. SM Mayor, City Council, and Chief of Police should be held accountable- call in the FBI for peats sake!! It will be a made for TV show, similar to Graceland, and public officials will be publicly shamed and rotting in prison for their role in looking the other way. Something bad will happen like a fire or a shooting and people will lose their lives due to this and then law enforcement will HAVE to intervene.

Does anyone have insight who the Murcia family are? What the heck happened to Protect and serve the Community SMPD!?!?

This is an eye opening story. Thank you for uncovering something so vital to the success or potential downfall of our community. When I have out-of-town family and friends visiting, I no longer take them to our local beach and pier because it's too dangerous, dirty, and unwelcoming. The vendors are aggressive in their sales and they leave trash everywhere. Please continue to follow up and dig deeper into this story. What is being done about to improve this situation? Why aren't the police doing more to rid the pier and beach of the criminal element? Why isn't the fire department actively ensuring no open flames on the wooden pier? What is the City Manager and Mayor doing to make the pier and beach the destination it once was? If the city is trying to attract more visitors and improve the local economy, the beach and pier is a good place to start.

Way to kill a City Santa Monica! Destroy trust by ignoring crime. Destroy tourism by supporting illegal activities and violence in public places. Destroy affordable housing with insane rent control that only serves lifetime residents. Push out mom and pop businesses and landlords by ignoring their needs before - during and following pandemic. OH - but anyone with the power to do anything is probably already vested to receive their pension...