Arson is suspected in the 750 acre fire, which is feeding on high winds and dry brush. Homes may be evacuated. 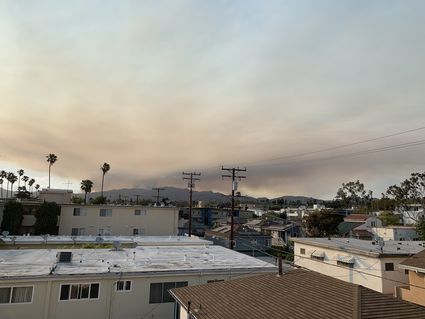 Update 8:15 pm: Palisades brushfire doubled in size to 750 acres. It triggered the evacuation of some Topanga Canyon residents. Those live in east of Topanga Canyon Boulevard between Topanga community Center and Vue Ridge Road as well as those north of Entradero Rd. south of Oakwood Drive and east of Henry rich mountain way. 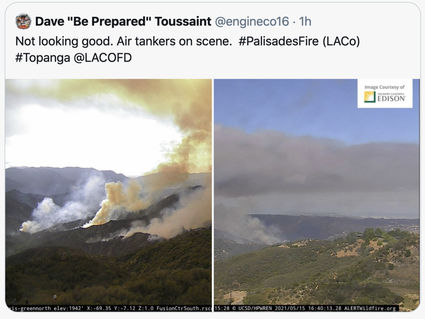 The Palisades Fire is visible from Santa Monica as it burns through the Topanga State Park. Arson is suspected, though authorities have not issued an official cause yet. Wind gusts of 25 miles an hour and dry brush is always an explosive combination in California. The fire began Saturday afternoon about 3 miles northwest of Pacific Palisades, in Topanga State Park.

At 5:20 p.m. PDT firefighters estimated it had burned 150 to 200 acres, said the Los Angeles County Fire Dept. The edge of the fire is less than a mile north of The Summit, a gated community.

Several helicopters and at least a half dozen fixed wing air tankers are working on the blaze. It is spreading through vegetation that has not burned in at least 60 years, according to records from the National Interagency Fire Center.

The fire is moving at moderate rate of spread, the County Fire Department said in a tweet. This is breaking news and will be updated.