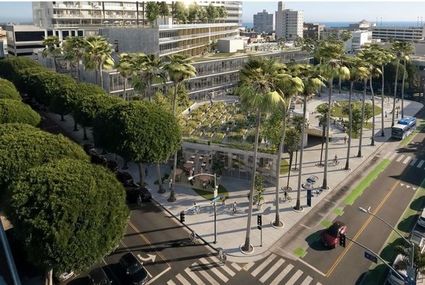 Artist's conception of the Plaza at 4th and Arizona

In an email sent by anti-development group Santa Monica Coalition for a Livable City, victory was declared over the city's attempt to put a large mulit-use building on what is now mostly a ground-level parking lot, used seasonally as an ice skating rink.

"Located on 2.5 acres of City owned land between 4th and 5th Street downtown, just south of Arizona Avenue; the Plaza would have included 11 stories of office space, luxury hotel rooms and underground parking. The proposed development, known as The Plaza at Santa Monica, is an 11-story, 240-room luxury hotel, with 106,800 square feet of creative office space, approximately 40,000 square feet of open public space and 48 units of affordable housing at 4th Street and Arizona Avenue in Downtown Santa Monica," the developer's website wrote in September 2020.

The Plaza was going to be large, generate large amounts of traffic, and greatly densify downtown, choking off the one area that enjoys sunlight. Below is the email from SMCLC:

Over a year ago we tried to convince the City that it had to follow the Surplus Land Act before it could give away our public land at 4th and Arizona to a private developer. We agreed with our State legislature that keeping public land public is one of the most important values for a City and its residents.

It's unfortunate that the City wouldn't listen to us, to our lawyers or to the public, compelling residents to ask a court to step in so the City wouldn't violate the law by continuing to negotiate a development agreement for this wildly unpopular project.

As a result, the City will have to pay legal fees over $100,000 to SMCLC's lawyers to settle this important lawsuit in the public interest. No money was sought by SMCLC and the entire settlement constitutes reasonable attorneys' fees and costs incurred in the lawsuit.

We thank councilmembers Phil Brock, Oscar de la Torre and Christine Parra for their steadfast actions to stop the Plaza and for enabling a fair settlement. And thank you to Mayor Himmelrich, who, in July of last year, was the sole councilmember to vote against continuing negotiations with the Plaza's developer on the basis that it was illegal to proceed without complying with the Surplus Land Act. This current council majority stood with residents -- as they told us they would -- to do what is right.

These kinds of public interest cases involve complex issues and are time-intensive. We are fortunate to have been represented so ably by Beverly Palmer, a Santa Monica resident and partner in the law firm Strumwasser & Woocher.

Lastly, we are very grateful for the strong public support we received from neighborhood associations and the many individuals who enabled us to bring this important lawsuit. Neighborhood associations, largely underfunded, do vital community work for residents and the city as a whole. This settlement will enable us to reach out to these groups, as well as individual donors, to ask whether they want their donation returned, or for those funds to be used by SMCLC for future campaigns as we continue to fight for residents to have a seat at the table when important decisions are made by our City.

Please forward this email to your friends and neighbors to sign up for updates and join in our efforts.