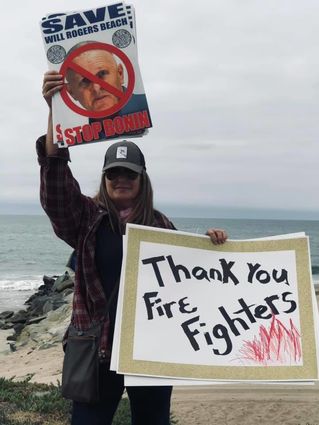 May 18, 2021 A fire that is suspected arson that started Friday night was 32% contained as of 9 am Tuesday morning, according to the Los Angeles County Fire Department incident report. Evacuation orders were lifted for Topanga residents but remain in place for residents of the north portion of the Palisades Highlands. A thousand residents had to be evacuated for the fire which has so far burned 1,158 acres. Better mapping decreased an earlier estimate of 1,325 acres.

At a press conference earlier, on Monday morning, officials announced the arrest of the person suspected of starting the fire. Earlier, two people had been questioned in connection with the fire. One was released and not considered a suspect. The individual who was arrested was reported to have suffered smoke inhalation for which he was being treated. His name and other identifying information was not given because officials said the investigation was ongoing.

However, the Fire Engineering website reports a source who claimed the suspect is a person "experiencing homelessness." At the presser on Monday, Fire Chief Ralph Terrazas said he didn't know if the suspect was homeless. Nevertheless, speculation is high among residents regarding a homeless man on probation for an arson conviction who makes his home in the unbuilt portion of the Palisades bluffs. A homeless support group, the Pacific Palisades Task Force on Homelessness have observed numerous, ritualistic fire pits created by this individual, but officials said they were unable to detain him. Nobody yet knows if this is indeed the suspect arrested by the police. 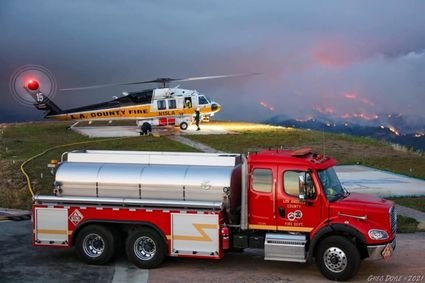 Firefighting helicopter pictured on Sunday, May 16, helping put out the Palisades Fire

Tuesday morning's incident report reads, "Firefighters made significant overnight progress on this fire. Containment lines were improved and firefighters were able to make acces to remote areas of the fire to mop-up." Fire officials attributed their success on Monday, after a full weekend of zero containment, on a "combined aerial and ground attack." In an earlier tweet, the County Fire Department said the lifting of cloud cover enabled them to use fixed wing planes for water dumps for the first time since the fire began. 540 firefighters from various Southern California agencies have helped to put down this conflagration.