California Hangs onto Mask Mandate Like a Baby with a Pacifier 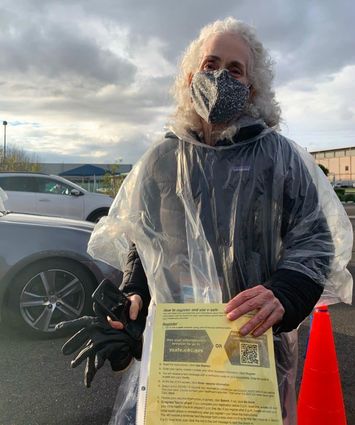 Barbara Ferrer, PhD, MPH, MEd, Director of Public Health for Los Angeles County, at a vaccination site; She is undoubtedly fully vaccinated herself at the time of this photo in late January, 2021

May 18, 2021 After taking the weekend to mull the matter, Governor Newsom and the California Department of Public Health decided that California would not be following the guidelines put forward May 13 by the Centers for Disease Control regarding masks. On Thursday, the federal CDC declared that vaccinated people could safely remove their masks in all situations: indoors or out, crowded or not.

But on Monday, California officials, ruling over a state with one of the lowest Covid-19 case rates in the country, said they would delay following the CDC's relaxed rules until June 15. Dr. Mark Ghaly, the state's Health and Human Services Secretary, said that residents needed "time to prepare for this change." With truly bizarre reasoning, Ghaly claimed another month of mask-wearing would somehow encourage more residents to get vaccinated. "Four weeks between now and June 15 allows a number of Californians who may be eligible to get vaccinated but were considering waiting a little longer - now that they see there will be less masking in our communities, they may decide this is the week to get vaccinated."

Come again? Why on earth would delaying the benefit of getting vaccinated - being allowed to take off the mask - send people to get vaccinated sooner rather than later? Assuming such people are willing to receive the vaccine at all, why would they not simply delay that inevitability along with the state's delay? On the other hand, if vaccine-willing-but-delaying individuals were offered the benefit of taking off their masks, one would think they would stop their delay and immediately look for the nearest clinic so they can receive that benefit as soon as possible.

Ghaly and Newsom appear to think that Californians are more motivated by fear than by anything else. The fear of getting the vaccine must be warring with the fear of being exposed to unmasked people, according to their thinking. This strange assumption appears to expose their own fear, a fear that has dominated official behavior since the pandemic began last year. Fear of getting blamed. Fear of being the guy on duty when the death toll is announced. This fear drove all of the draconian measures that shut down businesses, closed schools, and prohibited normal human discourse for over a year. It wasn't about the reality of Covid-19 transmission; it was about being able to pass the blame to the public. "You didn't wear a mask, you didn't socially distance - that's why so many of you died. Don't blame me!"

Part of an infographic (that is much longer) describing when it's okay to take off your mask and when you must wear it, depending on whether or not you've been vaccinated

In Los Angeles County, Barbara Ferrer, PhD, MPH, MEd, Director of Public Health, sent out a press release that was palpably relieved the state was keeping the mask mandate. "There continues to be COVID-19 transmission in California," she wrote even while admitting that the county's test positivity rate is 0.4% and there were only 161 new cases on Monday. "For that reason, the State will be keeping its current masking guidance until June 15, and L.A. County will do the same." She added that the CDC's new guidance "was not meant to eliminate current safety modifications at local and state levels, and the CDC acknowledged the importance of maintaining local protections."

Once officials like Ferrer are giving the power - and the implicit responsibility - for directing people's lives and keeping them healthy (as if they cannot do so on their own), it appears difficult for them to relinquish it.

We'll see if they can manage to do so on June 15, but it looks doubtful.